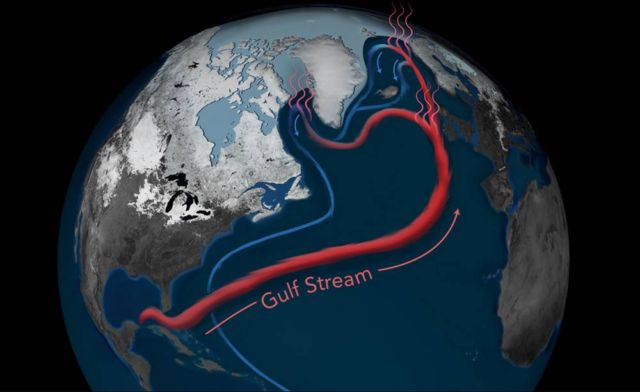 The Atlantic circulation system is currently at its weakest point in the past 1,600 years.

New research led by University College London (UCL) and Woods Hole Oceanographic Institution (WHOI) provides evidence that a key cog in the global ocean circulation system hasn’t been running at peak strength since the mid-1800s and is currently at its weakest point in the past 1,600 years.

If the system continues to weaken, it could disrupt weather patterns from the United States and Europe to the African Sahel, and cause more rapid increase in sea level on the U.S. East Coast.

The North Atlantic is a key juncture in the world ocean circulation system that has impacts on our climate. The Gulf Stream carries warm, salty water to the Labrador Sea and the Nordic Seas, where it releases heat to the atmosphere and warms Western Europe. The cooler, denser water then sinks to great depths to propel currents around the world and eventually circulate water back up to the Gulf Stream. 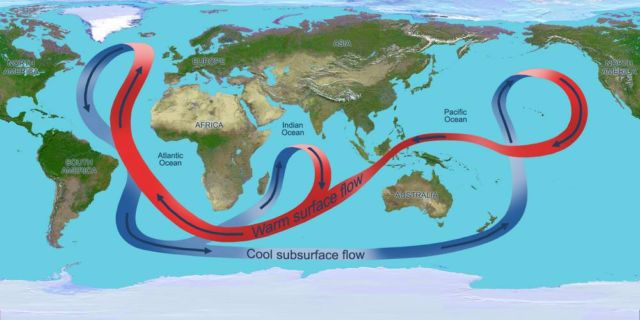 The overturning circulation of the global ocean.  Credit NASA/JPL

Dr. Delia Oppo, a senior scientist with WHOI and co-author of the study, said:

“Our study provides the first comprehensive analysis of ocean-based sediment records, demonstrating that this weakening of the Atlantic’s overturning began near the end of the Little Ice Age, a centuries-long cold period that lasted until about 1850.”

In the mid-19th century, a long period of cooler climate, known the Little Age, came to an end. Sea ice, ice sheets, and glaciers that had formed around the Arctic region began to melt, creating a huge natural tap of fresh water that gushed into the North Atlantic. This huge influx of fresh water diluted seawater on the ocean surface, making it lighter and less able to sink deep.