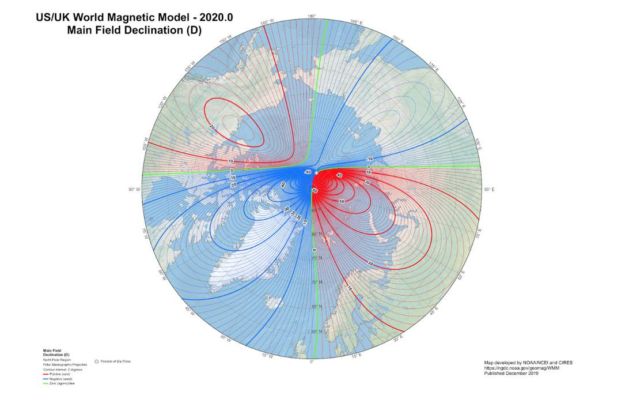 The latest version of the World Magnetic Model (WMM), one of the key tools developed to model the change in Earth’s magnetic field, has been released. Magnetic North Pole is moving fast towards Russia.

Developed by NCEI and the British Geological Survey, with support from the Cooperative Institute for Research in Environmental Sciences (CIRES), the WMM is a representation of the planet’s magnetic field that gives compasses dependable accuracy.

Smartphone and consumer electronics companies rely on the WMM to provide consumers with accurate compass apps, maps, and GPS services. The WMM is the also the standard navigation tool for the Federal Aviation Administration, U.S. Department of Defense, North Atlantic Treaty Organization (NATO), and more.

Drifting Poles
Since Earth’s magnetic field is created by its moving, molten iron core, its poles aren’t stationary and they wander independently of each other. Since its first formal discovery in 1831, the north magnetic pole has traveled around 1,400 miles (2,250 km). This wandering has been generally quite slow, allowing scientists to keep track of its position fairly easily. Since the turn of the century, this speed has increased.

The WMM2020 forecasts that the northern magnetic pole will continue drifting toward Russia, although at a slowly decreasing speed—down to about 40 km per year compared to the average speed of 55 km over the past twenty years.

The military uses the WMM for undersea and aircraft navigation, parachute deployment, and more. Other governmental organizations, such as NASA, the Federal Aviation Administration, U.S. Forest Service, and many more use the technology for surveying and mapping, satellite/antenna tracking, and air traffic management.

Airport runways are perhaps the most visible example of a navigation aid updated to match shifts in Earth’s magnetic field. Airports around the country use the data to give runways numerical names, which pilots refer to on the ground.

“The declination has changed just over 2.5 degrees over the past 22 years since Denver opened,” Heath Montgomery, the international airport’s former spokesperson, said after a previous WMM update.