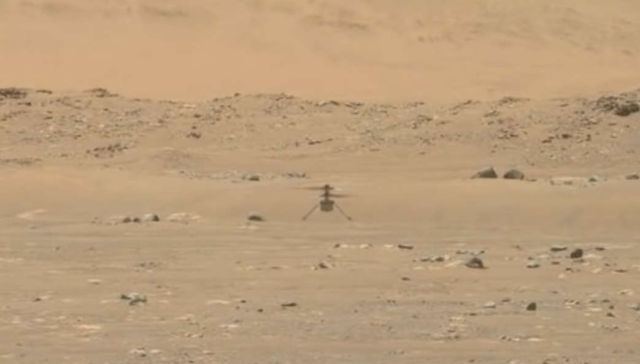 In this video captured by NASA’s Perseverance rover, the Ingenuity Mars Helicopter took the first powered, controlled flight on another planet on April 19, 2021.

The rover was parked at “Van Zyl Overlook,” about 211 feet (64.3 meters) away in Mars’ Jezero Crater and chronicled the flight operations with its cameras.

These images from the rover’s Mastcam-Z cameras show the helicopter hovering above the Red Planet’s surface. During this first flight, the helicopter climbed to an altitude of 10 feet (3 meters), hovered, and then touched back down on the surface of Mars.

Ingenuity is a technology demonstration. The 4-pound (1.8-kilogram) rotorcraft will help determine whether future explorations on Mars could include an aerial perspective.

Perseverance touched down at “Octavia E. Butler Landing” with Ingenuity attached to its belly on Feb. 18, 2021. The helicopter was deployed to the surface on April 3.