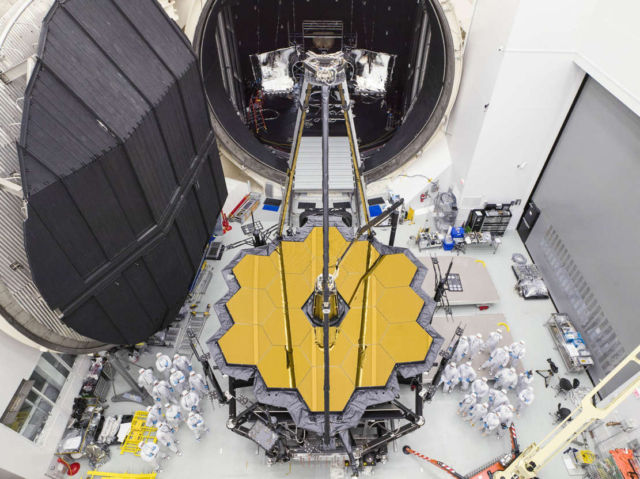 Engineers used a giant electromagnetic-powered metal plate to shake the telescope up to 100 times per second, to test it for the extreme conditions when ‘James Webb’ will be launched.

Above, NASA engineers pose with the James Webb Space Telescope shortly after its emergence from Chamber A, a giant vacuum chamber at the Johnson Space Center in Houston, on Dec. 1, 2017.  Credit: NASA/Chris Gunn

“To test its endurance even further, they locked the equipment in an ‘acoustics chamber.’ This is a thick-walled room with large speakers that produce literally deafening levels of sound.

The entire observatory must survive the mechanically stressing conditions from the violent vibration of launch. In addition to this, the “cold” half of the observatory—the telescope and its instruments—must survive the thermal shrinkage that occurs when they are cooling from room temperature to the cryogenic temperatures at which they operate in the cold of space.

The engineering challenge is to operate Webb at extremely cold temperatures, since Webb is built at room temperature. Materials typically shrink at various temperature rates as they get cold. We have to build the Webb telescope in a way so that it shrinks to precisely the right shape and dimensions when it’s extremely cold. Webb has to survive the stresses of shrinking and expanding during cold temperature tests and warming it back up again—things that will happen when it goes into space.”

Webb has to survive years in space, exposed to the radiation from the Sun and the galaxy.