Scientists can now look inside your body from a distance

Scientists can now look inside your body from a distance 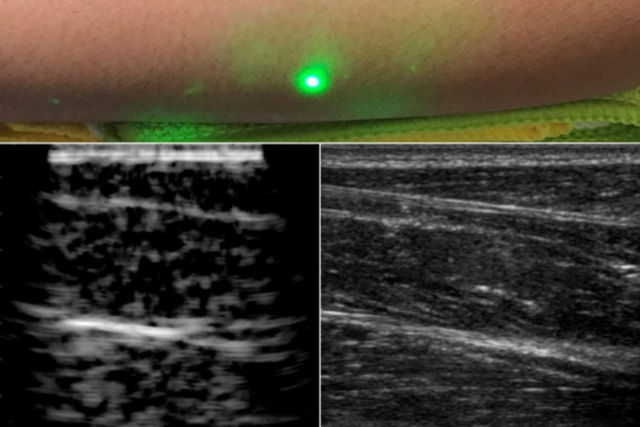 For most people, getting an ultrasound is a relatively easy procedure: As a technician gently presses a probe against a patient’s skin, sound waves generated by the probe travel through the skin, bouncing off muscle, fat, and other soft tissues before reflecting back to the probe, which detects and translates the waves into an image of what lies beneath.

Conventional ultrasound doesn’t expose patients to harmful radiation as X-ray and CT scanners do, and it’s generally noninvasive. But it does require contact with a patient’s body, and as such, may be limiting in situations where clinicians might want to image patients who don’t tolerate the probe well, such as babies, burn victims, or other patients with sensitive skin. Furthermore, ultrasound probe contact induces significant image variability, which is a major challenge in modern ultrasound imaging.

Now, MIT engineers have come up with an alternative to conventional ultrasound that doesn’t require contact with the body to see inside a patient. The new laser ultrasound technique leverages an eye- and skin-safe laser system to remotely image the inside of a person. When trained on a patient’s skin, one laser remotely generates sound waves that bounce through the body. A second laser remotely detects the reflected waves, which researchers then translate into an image similar to conventional ultrasound.

In a paper published today by Nature in the journal Light: Science and Applications, the team reports generating the first laser ultrasound images in humans. The researchers scanned the forearms of several volunteers and observed common tissue features such as muscle, fat, and bone, down to about 6 centimeters below the skin. These images, comparable to conventional ultrasound, were produced using remote lasers focused on a volunteer from half a meter away.

“We’re at the beginning of what we could do with laser ultrasound,” says Brian W. Anthony, a principal research scientist in MIT’s Department of Mechanical Engineering and Institute for Medical Engineering and Science (IMES), a senior author on the paper. “Imagine we get to a point where we can do everything ultrasound can do now, but at a distance. This gives you a whole new way of seeing organs inside the body and determining properties of deep tissue, without making contact with the patient.”

Image courtesy of the researchers