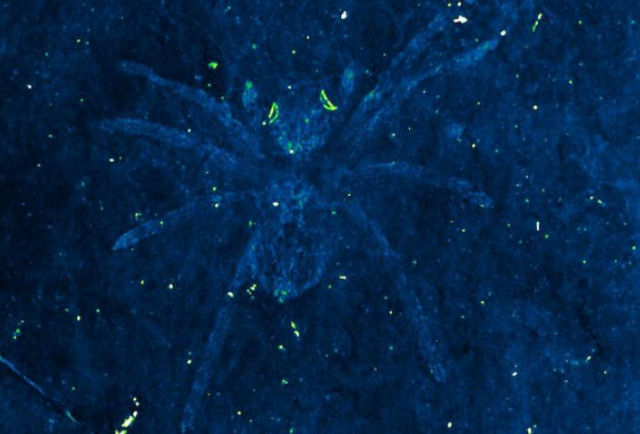 Usually, soft-bodied species like spiders aren’t fossilized in rock like animals with bones and teeth. More often, ancient spiders and insects are more likely to be discovered preserved in amber.

Yet a new paper in the Journal of Systematic Palaeontology, co-written by a University of Kansas researcher, describes fossil spiders found in an area of Korean shale called the Lower Cretaceous Jinju Formation.

What’s most remarkable: Two of the fossils from the extinct spider family Lagonomegopidae feature reflective eyes that enabled their nighttime hunting.

“Because these spiders were preserved in strange slivery flecks on dark rock, what was immediately obvious was their rather large eyes brightly marked with crescentic features. I realized this must have been the tapetum — that’s a reflective structure in an inverted eye where light comes in and is reverted back into retina cells. This is unlike a straightforward eye where light goes through and doesn’t have a reflective characteristic.”

The description of the fossils boosts the number of known spiders from the Jinju Formation from one to 11. The KU researcher said the spiders, who lived between 110 and 113 million years ago, must somehow have been protected from deterioration to have become so well-preserved in the shale formation.