2019 Ozone Hole is the smallest since its Discovery

2019 Ozone Hole is the smallest since its Discovery 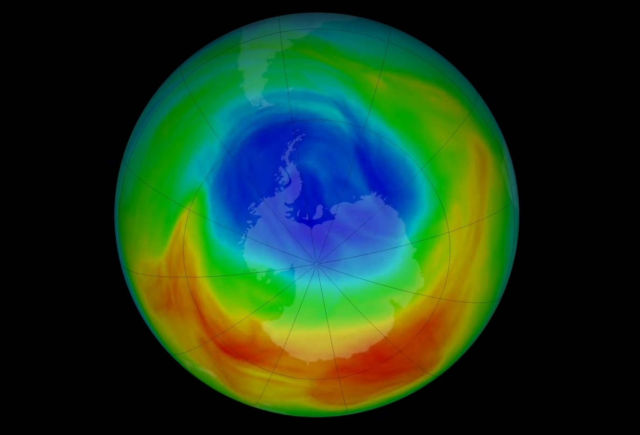 NASA and NOAA scientists just reported that abnormal weather patterns in the upper atmosphere over Antarctica dramatically limited ozone depletion in September and October, resulting in the smallest ozone hole observed since 1982.

“It’s great news for ozone in the Southern Hemisphere,” said Paul Newman, chief scientist for Earth Sciences at NASA’s Goddard Space Flight Center in Greenbelt, Maryland. “But it’s important to recognize that what we’re seeing this year is due to warmer stratospheric temperatures. It’s not a sign that atmospheric ozone is suddenly on a fast track to recovery.”

Ozone is a highly reactive molecule comprised of three oxygen atoms that occurs naturally in small amounts. Roughly seven to 25 miles above Earth’s surface, in a layer of the atmosphere called the stratosphere, the ozone layer is a sunscreen, shielding the planet from potentially harmful ultraviolet radiation that can cause skin cancer and cataracts, suppress immune systems and also damage plants.

The Antarctic ozone hole forms during the Southern Hemisphere’s late winter as the returning Sun’s rays start ozone-depleting reactions. These reactions involve chemically active forms of chlorine and bromine derived from man-made compounds. The chemistry that leads to their formation involves chemical reactions that occur on the surfaces of cloud particles that form in cold stratospheric layers, leading ultimately to runaway reactions that destroy ozone molecules. In warmer temperatures fewer polar stratospheric clouds form and they don’t persist as long, limiting the ozone-depletion process.