A beautiful View on Mars

A beautiful View on Mars 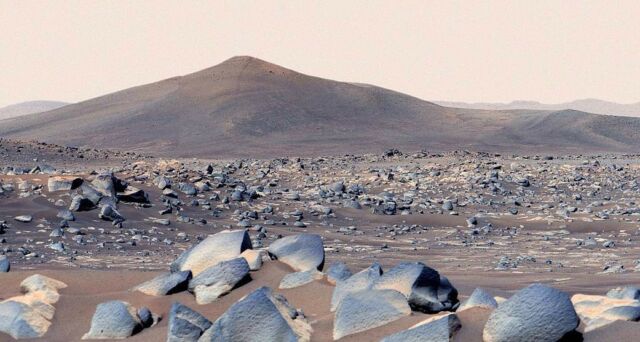 The image(s) was taken on April 29, 2021, the 68th Martian day, or sol, of the mission. About 20 inches (50 centimeters) across on average, the boulders in the foreground are among the type of rocks the rover team has named “Ch’al” (the Navajo term for “frog” and pronounced “chesh”).

Composed of multiple images, this enhanced-color mosaic was created using the left- and right-eye views of Perseverance’s Mastcam-Z camera system, merging the scene into a single, wider view. Santa Cruz hill is a possible eroded remnant of Jezero Crater’s western delta. The hill is about 164 feet (50 meters) tall and was roughly 1.6 miles (2.5 kilometers) east of the rover when the photo was taken, viewed from “Van Zyl Overlook.”

A key objective for Perseverance’s mission on Mars is astrobiology, including the search for signs of ancient microbial life. The rover will characterize the planet’s geology and past climate, pave the way for human exploration of the Red Planet, and be the first mission to collect and cache Martian rock and regolith (broken rock and dust).

Subsequent NASA missions, in cooperation with ESA (European Space Agency), would send spacecraft to Mars to collect these sealed samples from the surface and return them to Earth for in-depth analysis.