A Cell that can put Cancer to Sleep discovered

Home/Posts/Physics, Technology news/A Cell that can put Cancer to Sleep discovered
Previous Next

A Cell that can put Cancer to Sleep discovered 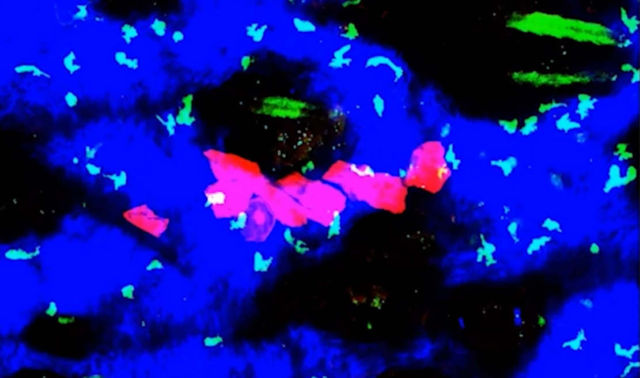 This new invention by Australian scientists could mark the end of skin cancer!

Scientists discover how the immune system can control melanoma, using a cell that can ‘put cancer to sleep’

Above, TRM cells (in light green) surrounding and keeping the melanoma cells (in red) in check. Image credit courtesy of Doherty Institute.

A team of Australian scientists including cancer researchers from the Telethon Kids Institute have made a crucial breakthrough in understanding how the immune system puts cancer to sleep.

Their findings, published today in Nature, could pave the way for improved cancer treatments which – rather than eradicating a cancer altogether – achieve the next best thing: permanent dormancy.

The pioneering research was the result of an international collaboration led by Telethon Kids and the Peter Doherty Institute for Infection and Immunity at the University of Melbourne.

A team including Dr Jason Waithman, Head of the Cancer Immunotherapy Group at Telethon Kids, investigated the role of a particular immune cell – tissue-resident memory T (TRM) – in controlling the growth of melanoma tumours.

“The principal of cutting-edge immunotherapies currently in clinical practice is that they generate a T-cell response. But if we can hone in on one type of T-cell – the TRM cells specifically, we could have an even bigger impact on stopping cancers from coming back.

We now have a much better understanding of which T-cells are important in controlling skin cancers and how those cells are working but there is still much more work to do to make these cells work even better.