A massive Star may have Disappeared

A massive Star may have Disappeared 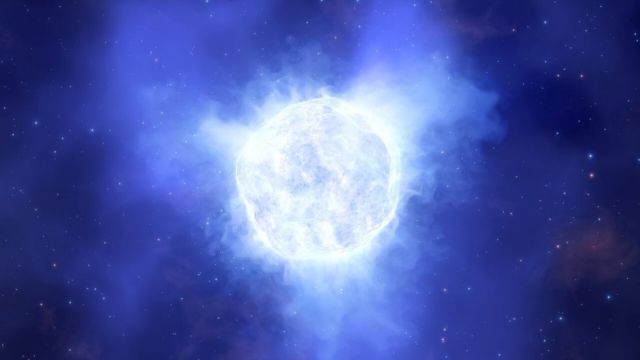 Astronomers using the European Southern Observatory’s Very Large Telescope (VLT), have discovered the absence of an unstable massive star in a dwarf galaxy.

Scientists think this could indicate that the star became less bright and partially obscured by dust. An alternative explanation is that the star collapsed into a black hole without producing a supernova. “If true,” says team leader and PhD student Andrew Allan of Trinity College Dublin, Ireland, “this would be the first direct detection of such a monster star ending its life in this manner.”

Above: This illustration shows what the luminous blue variable star in the Kinman Dwarf galaxy could have looked like before its mysterious disappearance.  Credit: ESO/L. Calçada.

Between 2001 and 2011, various teams of astronomers studied the mysterious massive star, located in the Kinman Dwarf galaxy, and their observations indicated it was in a late stage of its evolution. Allan and his collaborators in Ireland, Chile and the US wanted to find out more about how very massive stars end their lives, and the object in the Kinman Dwarf seemed like the perfect target. But when they pointed ESO’s VLT to the distant galaxy in 2019, they could no longer find the telltale signatures of the star. “Instead, we were surprised to find out that the star had disappeared!” says Allan, who led a study of the star published today in Monthly Notices of the Royal Astronomical Society.

Located some 75 million light-years away in the constellation of Aquarius, the Kinman Dwarf galaxy is too far away for astronomers to see its individual stars, but they can detect the signatures of some of them. From 2001 to 2011, the light from the galaxy consistently showed evidence that it hosted a ‘luminous blue variable’ star some 2.5 million times brighter than the Sun. Stars of this type are unstable, showing occasional dramatic shifts in their spectra and brightness. Even with those shifts, luminous blue variables leave specific traces scientists can identify, but they were absent from the data the team collected in 2019, leaving them to wonder what had happened to the star. “It would be highly unusual for such a massive star to disappear without producing a bright supernova explosion,” says Allan.