A metal-rich Asteroid worth quadrillions

A metal-rich Asteroid worth quadrillions 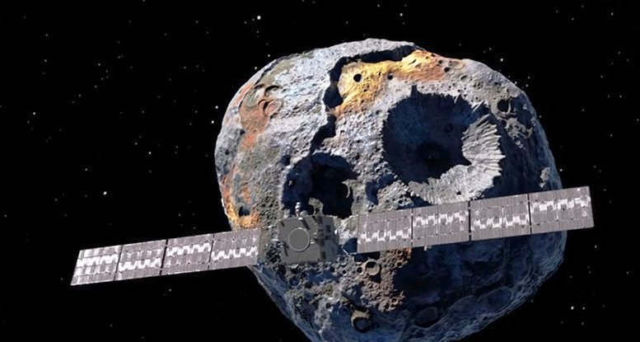 NASA plans mission to a metal-rich asteroid worth $10,000 Quadrillion.

NASA is planning a mission to the asteroid 16 Psyche, that should happen in 2026.

The agency wants to extract metals from the asteroid, that almost completely consists of nickel-iron metal, worthing more than the global economy.

Above, artist’s concept of the Psyche spacecraft, which will conduct a direct exploration of an asteroid thought to be a stripped planetary core.  Credit SSL/ASU/P. Rubin/NASA/JPL-Caltech

The Psyche mission will explore one of the most intriguing targets in the main asteroid belt – a giant metal asteroid, known as 16 Psyche, about three times farther away from the sun than is the Earth. This asteroid measures about 130 miles (210 kilometers) in diameter and, unlike most other asteroids that are rocky or icy bodies, is thought to be comprised mostly of metallic iron and nickel, similar to Earth’s core. Scientists wonder whether Psyche could be an exposed core of an early planet that could have been as large as Mars, but which lost its rocky outer layers due to a number of violent collisions billions of years ago.

The mission will help scientists understand how planets and other bodies separated into their layers – including cores, mantles and crusts – early in their histories.

“This is an opportunity to explore a new type of world – not one of rock or ice, but of metal,” said Psyche Principal Investigator Lindy Elkins-Tanton of Arizona State University in Tempe. “16 Psyche is the only known object of its kind in the solar system, and this is the only way humans will ever visit a core. We learn about inner space by visiting outer space.”