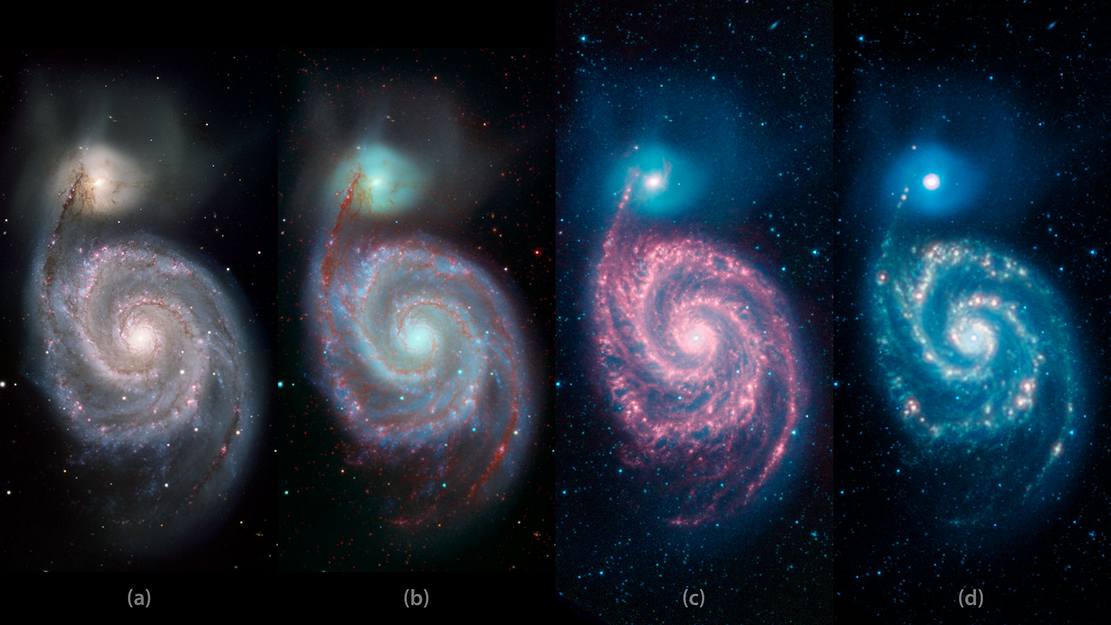 A Whirlpool ‘Warhol’ from NASA

A Whirlpool ‘Warhol’ from NASA 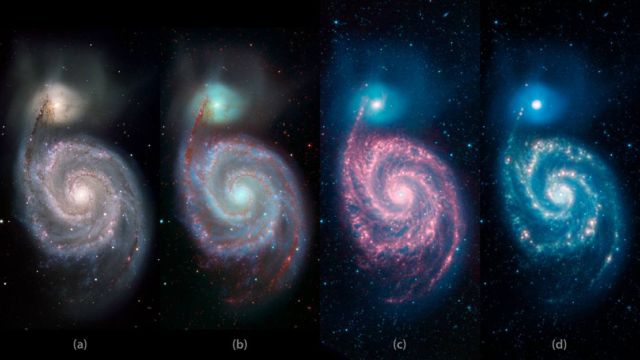 Unlike Andy Warhol’s famous silkscreen grids of repeating images rendered in different colors, the varying hues of this galaxy represent how its appearance changes in different wavelengths of light – from visible light to the infrared light seen by NASA’s Spitzer Space Telescope.

The Whirlpool galaxy, also known as Messier 51 and NGC 5194/5195, is actually a pair of galaxies that are tugging and distorting each other through their mutual gravitational attraction. Located approximately 23 million light-years away, it resides in the constellation Canes Venatici.

The leftmost panel (a) shows the Whirlpool in visible light, much as our eye might see it through a powerful telescope. In fact, this image comes from the Kitt Peak National Observatory 2.1-meter (6.8-foot) telescope. The spiraling arms are laced with dark threads of dust that radiate little visible light and obscure stars positioned within or behind them.

The second panel from the left (b) includes two visible-light wavelengths (in blue and green) from Kitt Peak but adds Spitzer’s infrared data in red. This emphasizes how the dark dust veins that block our view in visible light begin to light up at these longer, infrared wavelengths.

Spitzer’s full infrared view can be seen in the right two panels, which cover slightly different ranges of infrared light.

In the middle-right panel (c), we see three wavelengths of infrared light: 3.6 microns (shown in blue), 4.5 microns (green) and 8 microns (red). The blended light from the billions of stars in the Whirlpool is brightest at the shorter infrared wavelengths and is seen here as a blue haze. The individual blue dots across the image are mostly nearby stars and a few distant galaxies. Red features show us dust composed mostly of carbon that is lit up by the stars in the galaxy.

This glowing dust helps astronomers see where the densest areas of gas pile up in the spaces between the stars. Dense gas clouds are difficult to see in visible or infrared light, but they will always be present where there is dust.

The far-right panel (d) expands our infrared view to include light at a wavelength of 24 microns (in red), which is particularly good for highlighting areas where the dust is especially hot. The bright reddish-white spots trace regions where new stars are forming and, in the process, heating their surroundings.

The infrared views of the Whirlpool galaxy also show how dramatically different its two component parts are: The smaller companion galaxy at the top of the image has been stripped nearly clean of dust features that stand out so brilliantly in the lower spiral galaxy. The faint bluish haze seen around the upper galaxy is likely the blended light from stars thrown out of the galaxies as these two objects pull at each other during their close approach.

The Kitt Peak visible-light image (a) shows light at 0.4 and 0.7 microns (blue and red). The rightmost two images (c and d) are from Spitzer with red, green and blue corresponding to wavelengths of 3.6, 4.5 and 8.0 microns (middle right) and 3.6, 8.0 and 24 microns (far right). The middle-left (b) image blends visible wavelengths (blue/green) and infrared (yellow/red). All of the data shown here were released as part of the Spitzer Infrared Nearby Galaxies Survey (SINGS) project, captured during Spitzer’s cryogenic and warm missions.

Data are archived at the Infrared Science Archive housed at IPAC at Caltech. Caltech manages JPL for NASA.