An Object right between Planet and Star

An Object right between Planet and Star 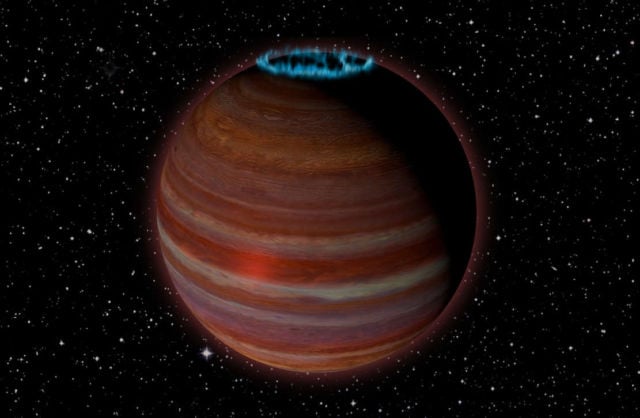 Using the National Science Foundation’s Karl G. Jansky Very Large Array (VLA), astronomers have made the first radio-telescope detection of a planetary-mass object beyond our Solar System. The object, about a dozen times more massive than Jupiter, is a surprisingly strong magnetic powerhouse and a “rogue,” traveling through space unaccompanied by any parent star.

Above, artist’s conception of SIMP J01365663+0933473, an object with 12.7 times the mass of Jupiter, but a magnetic field 200 times more powerful than Jupiter’s. This object is 20 light-years from Earth.  Credit: Caltech/Chuck Carter; NRAO/AUI/NSF

Melodie Kao, who led this study while a graduate student at Caltech, and is now a Hubble Postdoctoral Fellow at Arizona State University, said:

“This object is right at the boundary between a planet and a brown dwarf, or ‘failed star,’ and is giving us some surprises that can potentially help us understand magnetic processes on both stars and planets.”

The difference between a gas giant planet and a brown dwarf remains hotly debated among astronomers, but one rule of thumb that astronomers use is the mass below which deuterium fusion ceases, known as the “deuterium-burning limit”, around 13 Jupiter masses.