Assessing the role of Flying Cars in sustainable mobility

Assessing the role of Flying Cars in sustainable mobility 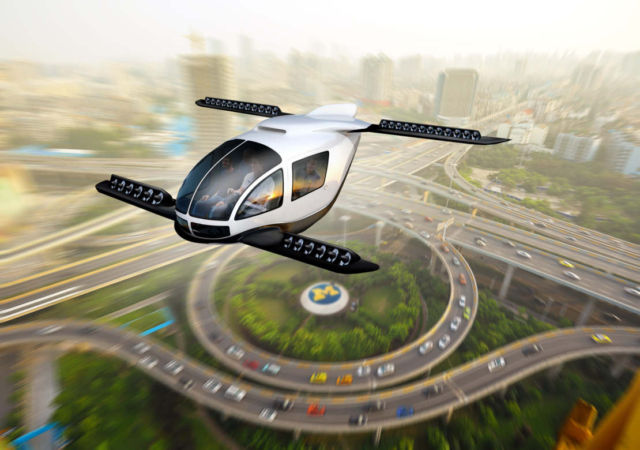 A new study of the environmental sustainability impacts of flying cars, formally known as electric vertical takeoff and landing aircraft, or VTOLs, finds that they wouldn’t be as environmentally sustainable as cars.

However, according to the study, VTOLs—which combine the convenience of vertical takeoff and landing like a helicopter with the efficient aerodynamic flight of an airplane—could play a niche role in sustainable mobility for longer trips, according to the study, which published April 9 in Nature Communications. Several companies around the world are developing VTOL prototypes.

Above, artistic rendering of an electric vertical takeoff and landing taxi cruising through an urban center. Image credit: Dave Brenner/University of Michigan School for Environment and Sustainability.

Flying cars would be especially valuable in congested cities, or in places where there are geographical constraints, as part of a ride-share taxi service, according to study authors from the University of Michigan’s Center for Sustainable Systems and from Ford Motor Company’s Research and Advanced Engineering team.

Gregory Keoleian, senior author of the study and director of the Center for Sustainable Systems at U-M’s School for Environment and Sustainability, said:

“To me, it was very surprising to see that VTOLs were competitive with regard to energy use and greenhouse gas emissions in certain scenarios. VTOLs with full occupancy could outperform ground-based cars for trips from San Francisco to San Jose or from Detroit to Cleveland, for example.”

The U-M-Ford study, the first comprehensive sustainability assessment of VTOLs, looked at the energy use, greenhouse gas emissions and time savings of VTOLs compared to ground-based passenger cars. Although VTOLs produce zero emissions during flight, their batteries require electricity generated at power plants.

The researchers found that for trips of 100 kilometers (62 miles), a fully loaded VTOL carrying a pilot and three passengers had lower greenhouse gas emissions than ground-based cars with an average vehicle occupancy of 1.54. Emissions tied to the VTOL were 52 percent lower than gasoline vehicles and 6 percent lower than battery-electric vehicles.