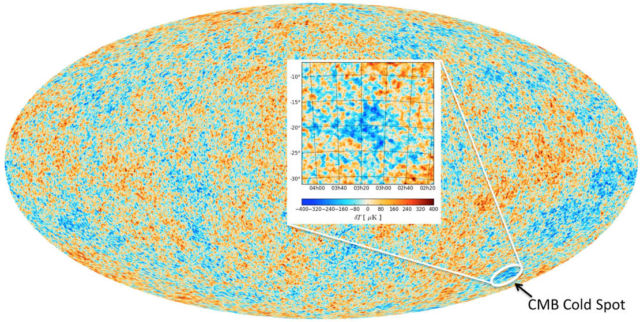 Astronomers found first evidence multiverse, a cosmos where there are multiple universes.

A supervoid is unlikely to explain a ‘Cold Spot’ in the cosmic microwave background, according to the results of a new survey, leaving room for exotic explanations like a collision between universes.
Above, the map of the cosmic microwave background (CMB) sky produced by the Planck satellite. Red represents slightly warmer regions, and blue slightly cooler regions. The Cold Spot is shown in the inset, with coordinates on the x- and y-axes, and the temperature difference in millionths of a degree in the scale at the bottom.  Credit: ESA and Durham University.

The cosmic microwave background (CMB), a relic of the Big Bang, covers the sky. At a temperature of 2.73 degrees above absolute zero (or -270.43 degrees Celsius), the CMB has some anomalies, including the Cold Spot.

The researchers, led by postgraduate student Ruari Mackenzie and Professor Tom Shanks in Durham University’s Centre for Extragalactic Astronomy, publish their results in Monthly Notices of the Royal Astronomical Society.

“The voids we have detected cannot explain the Cold Spot under standard cosmology. There is the possibility that some non-standard model could be proposed to link the two in the future but our data place powerful constraints on any attempt to do that.”