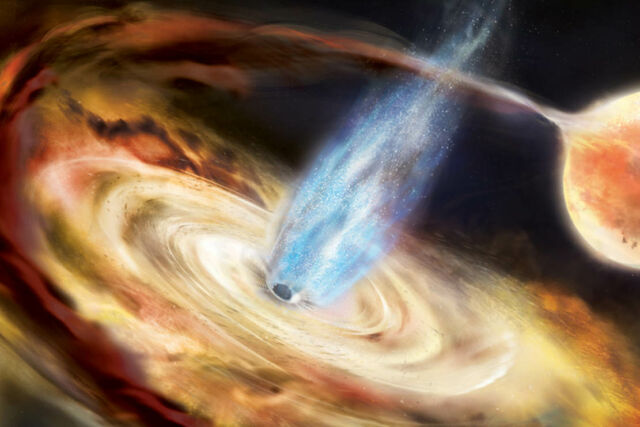 Simulations of the light echoes off of the accretion disk around a maximally spinning (“Kerr”) black hole.

The white circle indicates the location of the black hole event horizon, and the echoes of light are color-coded by their observed frequency, which can be distorted by Doppler shifts and by the strong gravity of the black hole.

The simulation has been sonified such that lower frequency light corresponds to a lower pitch sound.

MIT astronomers are looking for flashes and echoes from nearby black hole X-ray binaries — systems with a star orbiting, and occasionally being eaten away by, a black hole. They are analyzing the echoes from such systems to reconstruct a black hole’s immediate, extreme vicinity.

In a study appearing today in the Astrophysical Journal, the researchers report using a new automated search tool, which they’ve coined the “Reverberation Machine,” to comb through satellite data for signs of black hole echoes. In their search, they have discovered eight new echoing black hole binaries in our galaxy. Previously, only two such systems in the Milky Way were known to emit X-ray echoes.

In the above illustration, a black hole pulls material off a neighboring star and into an accretion disk.  Credit: Aurore Simonnet and NASA’s Goddard Space Flight Center