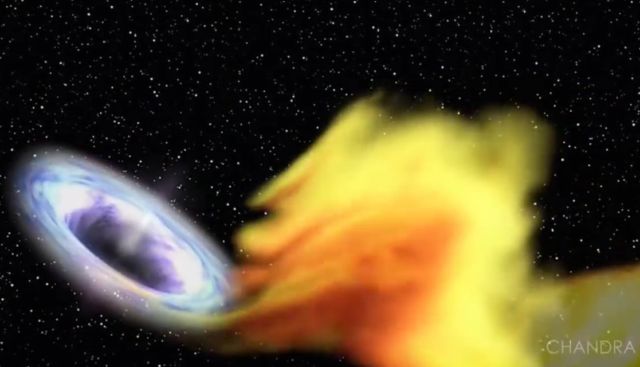 A supermassive black hole in a small galaxy 1.8 billion light years away, has been partaking in a decade-long binge of a star.

The phenomenon is known as a tidal disruption event and happens when an object gets too close to a black hole and is torn apart by gravity.

A trio of orbiting X-ray telescopes, including Chandra, was used to make this discovery of this unusually massive meal.

This artist’s illustration depicts what astronomers call a “tidal disruption event,” or TDE. This is when an object, such as a star, wanders too close to a black hole and is destroyed by tidal forces generated from the black hole’s intense gravitational forces. During a TDE, some of the stellar debris is flung outward at high speeds, while the rest (shown as the red material in the illustration) becomes hotter as it falls toward the black hole, generating a distinct X-ray flare. A wind blowing away from this infalling material is shown in blue.

Black holes are extremely compact and dense, generating incredibly powerful gravitational forces.
When an object, like a star, wanders too close, these forces can rip that object to pieces.
Some of the material from the doomed object is hurtled out into space. The black hole devours the rest.
Astronomers just found a black hole gnawing on the remains of a star for over ten years.
This is the largest meal, or the first clean-your-plate job, for a black hole ever seen.