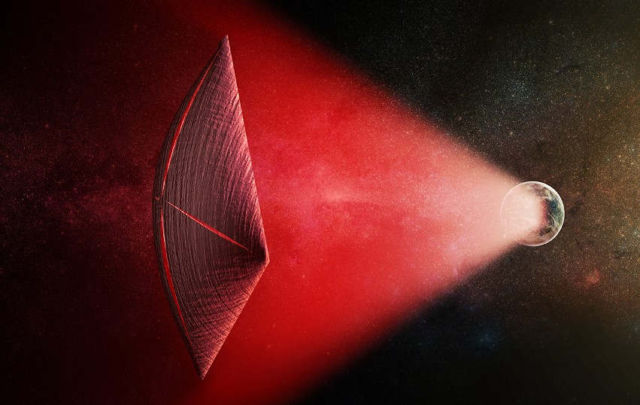 Scientists said that mystery radio bursts detected back in 2007, are powering alien spaceships.

Harvard Physicists just proposed that fast radio bursts, some of the most elusive and explosive signals ever detected in space, could powering alien probes.

Above, a light-sail powered by a radio beam generated on the surface of a planet.  Credit M. Weiss/CfA

Radio bursts detected in 2007 at the Parkes radio dish in Australia, while they last for mere milliseconds, they generate as much energy as 500 million Suns.

The newly published research suggests that specifically, these bursts might be leakage from planet-sized transmitters powering interstellar probes in distant galaxies.

Rhysicist Avi Loeb from the Harvard-Smithsonian Centre for Astrophysics, said:

“Fast Radio Bursts are exceedingly bright, given their short duration and origin at great distances, and we haven’t identified a possible natural source with any confidence.

An artificial origin is worth contemplating and checking.”

To power a light sail, the transmitter would need to focus a beam on it continuously. Observers on Earth would see a brief flash because the sail and its host planet, star and galaxy are all moving relative to us. As a result, the beam sweeps across the sky and only points in our direction for a moment. Repeated appearances of the beam, which were observed but cannot be explained by cataclysmic astrophysical events, might provide important clues about its artificial origin.

Can you push a spacecraft with light?

What if you could power a ship using sunlight instead of wind? Well in space, you can! Solar sails or light sails are pushed with light from the sun. Photons provide a kick when they reflect off the sail pushing the sail like an air molecule in the wind pushes a sailboat. Find out how a solar sail works and about the future of this technology!

Breakthrough Starshot is a $100 million research and development program, aiming to establish proof of concept for a ‘nanocraft’ – a fully functional space probe at gram-scale weight – driven by a light beam. A spacecraft like this, equipped with a lightsail, has the potential to reach twenty percent of the speed of light – or 100 million miles an hour. At that speed, it could reach Alpha Centauri, our nearest star system, in around 20 years. Using the fastest conventional rocket propulsion system available, the same journey would take tens of thousands of years.