The Matternet Station is part of an autonomous delivery drone network in Switzerland.

Easy-to-use interface for sending and receiving packages 24/7/365. The Matternet Station integrated with the Matternet Cloud and the M2 Drone for payload and battery exchange, autonomous take-off and landing.

Matternet, developer of the world’s leading autonomous drone logistics platform, unveiled the Matternet Station, which enables fully-automated ground operations for Matternet customer networks.
It is the third and ﬁnal technology component for enabling company’s vision of distributed, peer-to-peer logistics networks. It is integrated with Matternet’s autonomous M2 Drone and Matternet’s Cloud platform to provide an intuitive user interface for sending and receiving packages through Matternet.

In March 2017, Matternet became the ﬁrst company in the world to receive authorization for full operations of drone logistics networks over densely populated areas in Switzerland. The ﬁrst Stations will service healthcare systems in Switzerland to automate on-demand transportation of blood and pathology samples between hospital facilities. The Station occupies a small footprint of approximately 2 square meters and can be installed at ground or rooftop locations. It is equipped with technology that guides the Matternet M2 Drone to precision landing on the Station’s platform. After landing, the Station locks the drone in place and automatically swaps its battery and payload. A user is able to send a package to another location by simply scanning it into the Matternet Station, or receive a package from the Station by scanning a QR code. Each Station comes with its own automated aerial deconﬂiction system that manages drone trafﬁc over the Station. 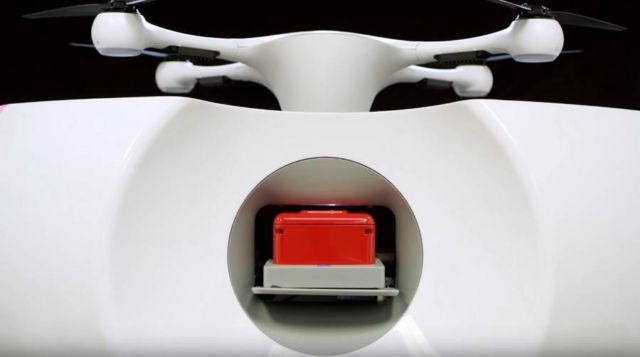