Dinosaur Fossil so perfect discovered we even know its Skin color

Dinosaur Fossil so perfect discovered we even know its Skin color 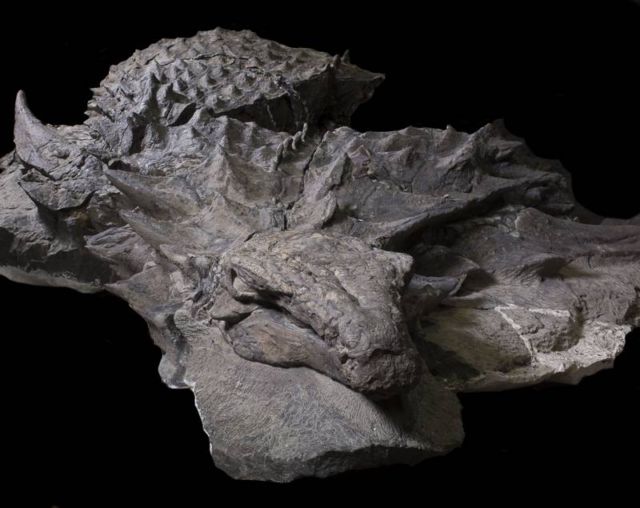 A perfectly preserved new species of dinosaur discovered by researchers in Canada.

Discovered in a mine in Alberta, the fossilized dinosaur’s skin, its heavily-armoured back and head is clearly visible, that Canadian palaeontologists named the specimen the ‘Mona Lisa’ of dinosaurs.

Above, one of the best preserved dinosaur fossils ever found, complete with skin and scales.  Credit Courtesy of the Royal Tyrrell Museum of Palaeontology, Drumheller, Canada.

Some 110 million years ago, this armored plant-eater lived in western Canada, until a flooded river swept it into the sea. Its undersea burial preserved it in stunning detail.

The specimen’s stomach contents have been also preserved, giving new clues to its nutrition.

An artist’s impression of the Borealopelta markmitchelli.  Courtesy of the Royal Tyrrell Museum of Palaeontology, Drumheller, Canada.

One the researchers Caleb Brown, from Royal Tyrrell Museum in Canada, said:

“Strong predation on a massive, heavily-armoured dinosaur illustrates just how dangerous the dinosaur predators of the Cretaceous must have been.

This nodosaur is truly remarkable in that it is completely covered in preserved scaly skin, yet is also preserved in three dimensions, retaining the original shape of the animal. The result is that the animal looks almost the same today as it did back in the Early Cretaceous. You don’t need to use much imagination to reconstruct it; if you just squint your eyes a bit, you could almost believe it was sleeping … It will go down in science history as one of the most beautiful and best preserved dinosaur specimens – the Mona Lisa of dinosaurs.”