Evidence for Fifth Force of Nature

Evidence for Fifth Force of Nature 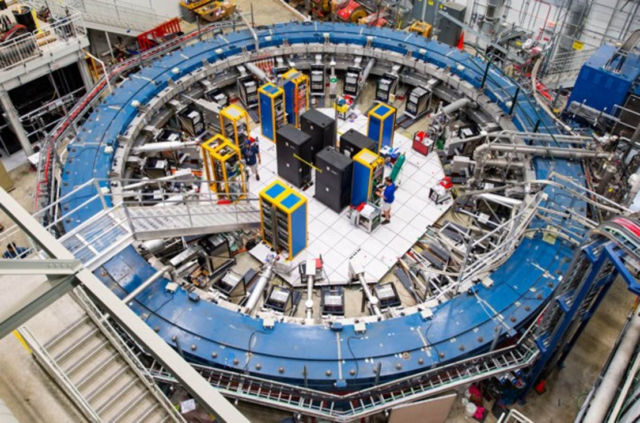 The first results from the Muon g-2 experiment hosted at Fermilab show fundamental particles called muons behaving in a way not predicted by the Standard Model of particle physics.

These results confirm and strengthen the findings of an earlier experiment of the same name performed at Brookhaven National Laboratory. Combined, the two results show strong evidence that our best theoretical model of the subatomic world is incomplete. One potential explanation would be the existence of undiscovered particles or forces.

Image: The centerpiece of the experiment is a 50-foot-diameter superconducting magnetic storage ring, which sits in its detector hall amidst electronics racks, the muon beamline, and other equipment. This impressive experiment operates at negative 450 degrees Fahrenheit and studies the precession (or wobble) of muons as they travel through the magnetic field.  Credit Reidar Hahn, Fermilab

This video explains what a muon is, how the Muon g-2 experiment works, and the significance of this result.

The long-awaited first results from the Muon g-2 experiment at the U.S. Department of Energy’s Fermi National Accelerator Laboratory show fundamental particles called muons behaving in a way that is not predicted by scientists’ best theory, the Standard Model of particle physics. This landmark result, made with unprecedented precision, confirms a discrepancy that has been gnawing at researchers for decades.

The strong evidence that muons deviate from the Standard Model calculation might hint at exciting new physics. Muons act as a window into the subatomic world and could be interacting with yet undiscovered particles or forces.

“Today is an extraordinary day, long awaited not only by us but by the whole international physics community,” said Graziano Venanzoni, co-spokesperson of the Muon g-2 experiment and physicist at the Italian National Institute for Nuclear Physics. “A large amount of credit goes to our young researchers who, with their talent, ideas and enthusiasm, have allowed us to achieve this incredible result.”