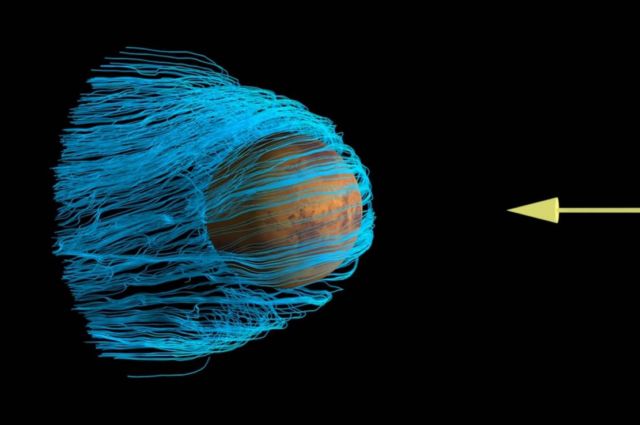 Five years after NASA’s MAVEN spacecraft entered into orbit around Mars, data from the mission has led to the creation of a map of electric current systems, that are fundamental to atmospheric loss.

Now, MAVEN’s detailed measurements of the magnetic environment surrounding Mars have revealed the shape of these electric currents for the first time.

“These currents play a fundamental role in the atmospheric loss that transformed Mars from a world that could have supported life into an inhospitable desert,” said experimental physicist Robin Ramstad of the University of Colorado, Boulder. “We are now currently working on using the currents to determine the precise amount of energy that is drawn from the solar wind and powers atmospheric escape.” Ramstad is lead author of a paper on this research published May 25 in Nature Astronomy. 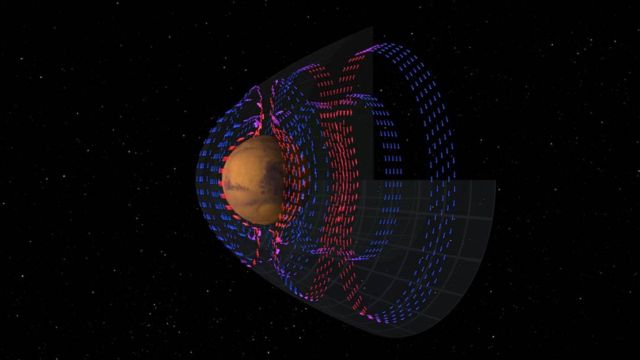 This image is from a scientific visualization of the electric currents around Mars. Electric currents (blue and red arrows) envelop Mars in a nested, double-loop structure that wraps continuously around the planet from its day side to its night side. These current loops distort the solar wind magnetic field (not pictured), which drapes around Mars to create an induced magnetosphere around the planet. In the process, the currents electrically connect Mars’ upper atmosphere and the induced magnetosphere to the solar wind, transferring electric and magnetic energy generated at the boundary of the induced magnetosphere (faint inner paraboloid) and at the solar wind bow shock (faint outer paraboloid).  Credits: NASA/Goddard/MAVEN/CU Boulder/SVS/Cindy Starr