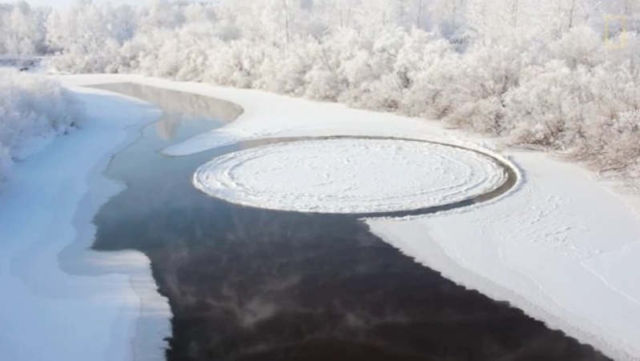 Video captured in 2016 shows a symmetrical 50 feet in diameter circle of ice, in a river in Omsk Oblast, in central Russia…

Researchers from the University of Liege in Belgium, discovered that temperature changes and not flowing rivers, prompted the spinning.

They published their study in the journal Physical Review E.

Rotation of ice disc at the surface of a pool

An ice disk (85 mm of diameter) is placed at the surface of a hot bath (about 20°C). While melting, the water just below the ice disk is cooled down by the ice and then, sinks because of the 4°C anomaly of the water density. This vertical motion generates a vortex that entrain the rotation of the ice disk.