Gravitational Waves detected with the greatest Precision ever

Gravitational Waves detected with the greatest Precision ever 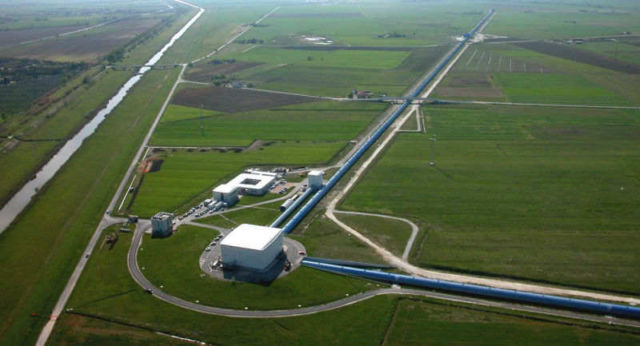 Last year astronomers announced the discovery of gravitational waves, that ripple the shape of space itself, when violent events are taking place, like black holes collision.

The detectors on two continents recorded wave signals from a pair of black holes colliding. This discovery, is the first observation of gravitational waves by three different detectors, marking a new era of greater insights and improved localization of cosmic events now available through globally networked gravitational-wave observatories.

Above, the Virgo site showing the Mode-Cleaner building, the Central building, the 3 kilometer-long west arm and the beginning of the north arm.  Credit: The Virgo collaboration/CCO 1.0

The detection by the LIGO Scientific Collaboration (LSC) and the Virgo collaboration is the first confirmed gravitational wave signal recorded by the Virgo detector. A paper about the event, a collision designated GW170814, has been accepted for publication in the journal Physical Review Letters.

“Little more than a year and a half ago, NSF announced that its Laser Interferometer Gravitational Wave Observatory had made the first-ever detection of gravitational waves, which resulted from the collision of two black holes in a galaxy a billion light-years away. Today, we are delighted to announce the first discovery made in partnership between the Virgo gravitational-wave observatory and the LIGO Scientific Collaboration, the first time a gravitational wave detection was observed by these observatories, located thousands of miles apart. This is an exciting milestone in the growing international scientific effort to unlock the extraordinary mysteries of our universe.”