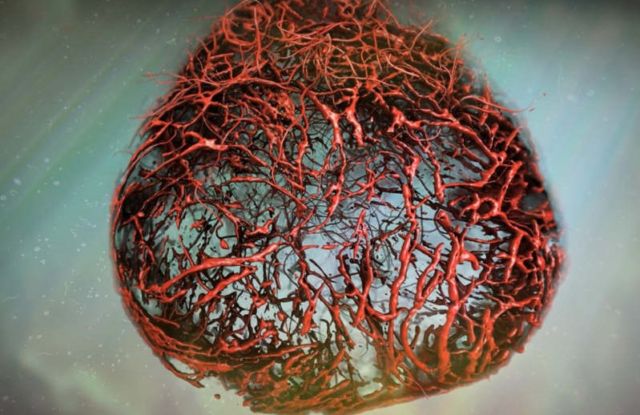 Scientists, for the first time, have managed to grow perfect human blood vessels as organoids in a petri dish.

Researchers from the University of British Columbia were able to coax stem cells into growing into human blood vessel “organoids.”

The breakthrough engineering technology, outlined in a new study published in Nature, dramatically advances research of vascular diseases like diabetes, identifying a key pathway to potentially prevent changes to blood vessels—a major cause of death and morbidity among those with diabetes.

Above, an illustration of vascular organoids, lab-made human blood vessels, based on original data.  Credit: IMBA

According to study’s senior author the Canada 150 Research Chair in Functional Genetics, Josef Penninger, an organoid is a three-dimensional structure grown from stem cells that mimics an organ and can be used to study aspects of that organ in a petri dish.

“Being able to build human blood vessels as organoids from stem cells is a game changer.

Every single organ in our body is linked with the circulatory system. This could potentially allow researchers to unravel the causes and treatments for a variety of vascular diseases, from Alzheimer’s disease, cardiovascular diseases, wound healing problems, stroke, cancer and, of course, diabetes.”

Diabetes affects an estimated 420 million people worldwide. Many diabetic symptoms are the result of changes in blood vessels that result in impaired blood circulation and oxygen supply of tissues. Despite its prevalence, very little is known about the vascular changes arising from diabetes. This limitation has slowed the development of much-needed treatment.