How far has nuclear fusion power come? We could be at a turning point for the technology.

Our society faces the grand challenge of providing sustainable, secure and affordable means of generating energy, while trying to reduce carbon dioxide emissions to net zero around 2050.

To date, developments in fusion power, which potentially ticks all these boxes, have been funded almost exclusively by the public sector. However, something is changing.

Private equity investment in the global fusion industry has more than doubled in just one year – from US$2.1 billion in 2021 to US$4.7 billion in 2022, according to a survey from the Fusion Industry Association.

So, what is driving this recent change? There’s lots to be excited about.

Before we explore that, let’s take a quick detour to recap what fusion power is. 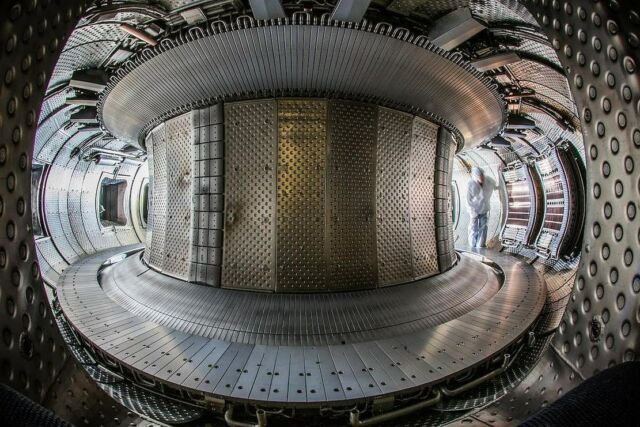 A donut-shaped magnetic confinement device called a tokamak is one of the leading designs for a working fusion power generator, with many such experiments running worldwide. Christopher Roux, EUROfusion Consortium, CC BY

Fusion works the same way our Sun does, by merging two heavy hydrogen atoms under extreme heat and pressure to release vast amounts of energy.

It’s the opposite of the fission process used by nuclear power plants, in which atoms are split to release large amounts of energy.

Our Sun sustains fusion at its core with a plasma of charged particles at around 15 million degrees Celsius. Down on Earth, we are aiming for hundreds of millions of degrees Celsius, because we don’t have the enormous mass of the Sun compressing the fuel down for us.

Scientists and engineers have worked out several designs for how we might achieve this, but most fusion reactors use strong magnetic fields to “bottle” and confine the hot plasma.

Generally, the main challenge to overcome on our road to commercial fusion power is to provide environments that can contain the intense burning plasma needed to produce a fusion reaction that is self-sustaining, producing more energy than was needed to get it started.

Joining the public and private

Fusion development has been progressing since the 1950s. Most of it was driven by government funding for fundamental science.

Now, a growing number of private fusion companies around the world are forging ahead towards commercial fusion energy. A change in government attitudes has been crucial to this.

The US and UK governments are fostering public-private partnerships to complement their strategic research programs.

For example, the White House recently announced it would develop a “bold decadal vision for commercial fusion energy”.

In the United Kingdom, the government has invested in a program aimed at connecting a fusion generator to the national electricity grid.

The technology has actually advanced, too

In addition to public-private resourcing, the technologies we need for fusion plants have come along in leaps and bounds.

In 2021, MIT scientists and Commonwealth Fusion Systems developed a record-breaking magnet that will allow them to build a compact fusion device called SPARC “that is substantially smaller, lower cost, and on a faster timeline”.

In recent years, several fusion experiments have also reached the all-important milestone of sustaining plasma temperatures of 100 million degrees Celsius or above. These include the EAST experiment in China, Korea’s flagship experiment KSTAR, and UK-based company Tokamak Energy.

And the next-step fusion energy experiment to demonstrate net power gain, ITER, is under construction in France and now about 80% complete.

Magnets aren’t the only path to fusion either. In November 2021, the National Ignition Facility at Lawrence Livermore National Laboratory in California achieved a historic step forward for inertial confinement fusion.

By focusing nearly 200 powerful lasers to confine and compress a target the size of a pencil’s eraser, they produced a small fusion “hot spot” generating fusion energy over a short time period.

In Australia, a company called HB11 is developing proton-boron fusion technology through a combination of high-powered lasers and magnetic fields.

Fusion and renewables can go hand in hand

It is crucial that investment in fusion is not at the cost of other forms of renewable energy and the transition away from fossil fuels.

We can afford to expand adoption of current renewable energy technology like solar, wind, and pumped hydro while also developing next-generation solutions for electricity production.

This exact strategy was outlined recently by the United States in its Net-Zero Game Changers Initiative. In this plan, resource investment will be targeted to developing a path to rapid decarbonisation in parallel with the commercial development of fusion.

History shows us that incredible scientific and engineering progress is possible when we work together with the right resources – the rapid development of COVID-19 vaccines is just one recent example.

It is clear many scientists, engineers, and now governments and private investors (and even fashion designers) have decided fusion energy is a solution worth pursuing, not a pipe dream. Right now, it’s the best shot we’ve yet had to make fusion power a viable reality.