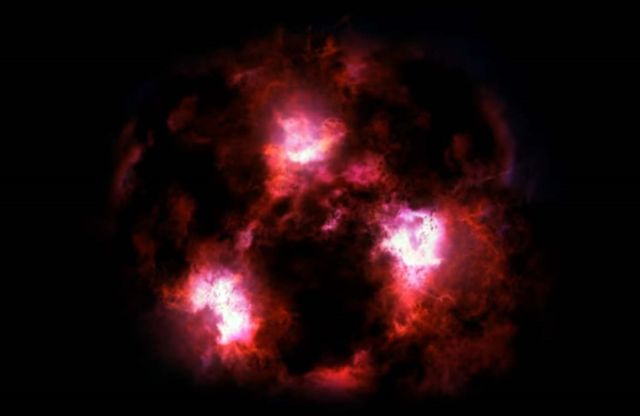 Scientists have by chance discovered faint traces of a huge galaxy never seen before, dating from the early universe.

A team of astronomers including assistant professor Kate Whitaker at the University of Massachusetts Amherst, found new evidence for huge deep space objects.

Above, an artist’s impression of what a massive galaxy in the early universe might look like. Images courtesy of James Josephides, Swinburne Astronomy Productions, Christina Williams, University of Arizona and Ivo Labbé, Swinburne University.

Likening the finding to photographing footprints of the mythical Yeti, the authors, led by postdoctoral fellow Christina Williams at the University of Arizona, say the scientific community once regarded such monster galaxies as folklore because there was no evidence for them, until now.

Whitaker and Williams, both UMass Amherst alumni, and colleagues say the discovery provides new insights into the first growing steps of some of the biggest galaxies in the universe. Details appear in the current Astrophysical Journal.

Whitaker, an expert in early galaxy formation and evolution, says, “These otherwise hidden galaxies are truly intriguing; it makes you wonder if this is just the tip of the iceberg, with a whole new type of galaxy population just waiting to be discovered.”

For this work, the astronomers used the ALMA – the Atacama Large Millimeter Array –a collection of 66 radio telescopes located in the high mountains of Chile. In new observations with extremely sensitive detection limits, Williams noticed a faint blob of light. “It was very mysterious,” she says, “but the light seemed not to be linked to any known galaxy at all. When I saw this galaxy was invisible at any other wavelength, I got really excited, because it meant that it was probably really far away and hidden by clouds of dust.”

The researchers estimate that the signal came from so far away that it took 12.5 billion years to reach Earth, when the universe was in its infancy. They think the observed emission is caused by the warm glow of dust particles – which effectively obscure all light ­– heated by stars forming deep inside a young galaxy.