Hurricane Ida turned into a Monster

Hurricane Ida turned into a Monster 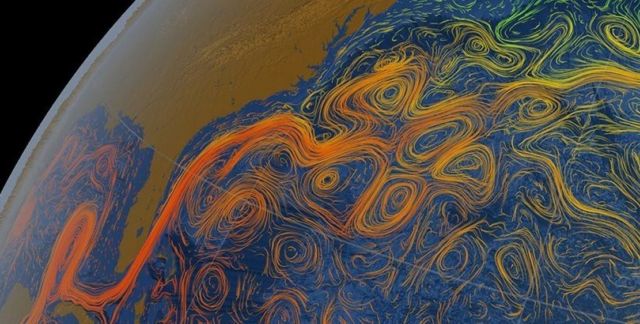 Hurricane Ida turned into a monster thanks to a giant warm patch in the Gulf of Mexico – here’s what happened.

As Hurricane Ida headed into the Gulf of Mexico, a team of scientists was closely watching a giant, slowly swirling pool of warm water directly ahead in its path.

That warm pool, an eddy, was a warning sign. It was around 125 miles (200 kilometers) across. And it was about to give Ida the power boost that in the span of less than 24 hours would turn it from a weak hurricane into the dangerous Category 4 storm that slammed into Louisiana just outside New Orleans on Aug. 29, 2021.

Above: A computer animation reflects the temperature change as eddies spin off from the Loop Current and Gulf Stream along the U.S. Coast.

Nick Shay, an oceanographer at the University of Miami’s Rosenstiel School of Marine and Atmospheric Science, was one of those scientists. He explains how these eddies, part of what’s known as the Loop Current, help storms rapidly intensify into monster hurricanes.

How do these eddies form?

The Loop Current is a key component of a large gyre, or circular current, rotating clockwise in the North Atlantic Ocean. Its strength is related to the flow of warm water from the tropics and Caribbean Sea into the Gulf of Mexico and out again through the Florida Straits, between Florida and Cuba. From there, it forms the core of the Gulf Stream, which flows northward along the Eastern Seaboard.

In the Gulf, this current can start to shed large warm eddies when it gets north of about the latitude of Fort Myers, Florida. At any given time, there can be as many as three warm eddies in the Gulf, slowly moving westward. When these eddies form during hurricane season, their heat can spell disaster for coastal communities around the Gulf.

Subtropical water has a different temperature and salinity than Gulf common water, so its eddies are easy to identify. They have warm water at the surface and temperatures of 78 degrees Fahrenheit (26 C) or more in water layers extending about 400 or 500 feet deep (about 120 to 150 meters). Since the strong salinity difference inhibits mixing and cooling of these layers, the warm eddies retain a considerable amount of heat.

When heat at the ocean surface is over about 78 F (26 C), hurricanes can form and intensify. The eddy that Ida passed over had surface temperatures over 86 F (30 C).

How did you know this eddy was going to be a problem?

We monitor ocean heat content from space each day and keep an eye on the ocean dynamics, especially during the summer months. Keep in mind that warm eddies in the wintertime can also energize atmospheric frontal systems, such as the “storm of the century” that caused snowstorms across the Deep South in 1993.

To gauge the risk this heat pool posed for Hurricane Ida, we flew aircraft over the eddy and dropped measuring devices, including what are known as expendables. An expendable parachutes down to the surface and releases a probe that descends about 1,300 to 5,000 feet (400 to 1,500 meters) below the surface. It then sends back data about the temperature and salinity.

This eddy had heat down to about 480 feet (around 150 meters) below the surface. Even if the storm’s wind caused some mixing with cooler water at the surface, that deeper water wasn’t going to mix all the way down. The eddy was going to stay warm and continue to provide heat and moisture.

That meant Ida was about to get an enormous supply of fuel. 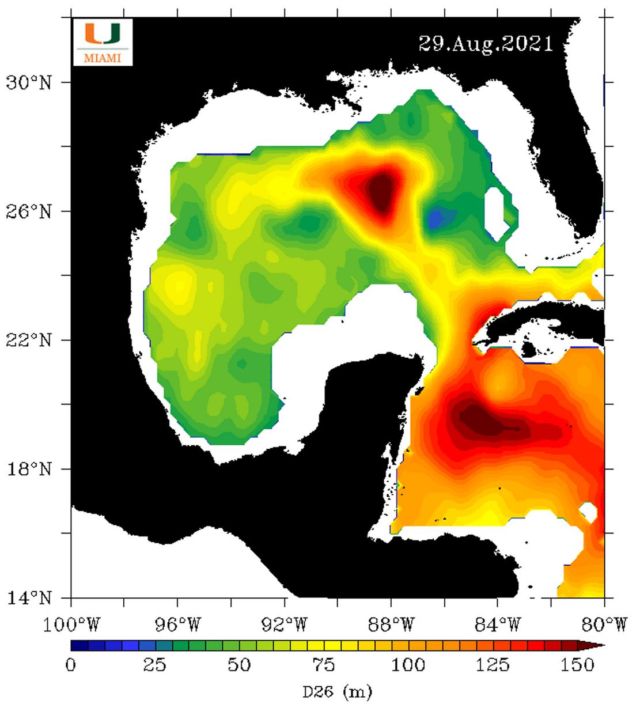 Ida’s route to Louisiana passed through very warm water. The scale, in meters, shows the maximum depth at which temperatures were 78 degrees Fahrenheit (26 C) or greater. University of Miami, CC BY-ND

When warm water extends deep like that, we start to see the atmospheric pressure drop. The moisture transfers, or latent heat, from the ocean to atmosphere are sustained over the warm eddies since the eddies are not significantly cooling. As this release of latent heat continues, the central pressures continue to decrease. Eventually the surface winds will feel the larger horizontal pressure changes across the storm and begin to speed up.

That’s what we saw the day before Hurricane Ida made landfall. The storm was beginning to sense that really warm water in the eddy. As the pressure keeps going down, storms get stronger and more well defined.

When I went to bed at midnight that night, the wind speeds were about 105 miles per hour. When I woke up a few hours later and checked the National Hurricane Center’s update, it was 145 miles per hour, and Ida had become a major hurricane.

Is rapid intensification a new development?

We’ve known about this effect on hurricanes for years, but it’s taken quite a while for meteorologists to pay more attention to the upper ocean heat content and its impact on the rapid intensification of hurricanes.

In 1995, Hurricane Opal was a minimal tropical storm meandering in the Gulf. Unknown to forecasters at the time, a big warm eddy was in the center of the Gulf, moving about as fast as Miami traffic in rush hour, with warm water down to about 150 meters. All the meteorologists saw in the satellite data was the surface temperature, so when Opal rapidly intensified on its way to eventually hitting the Florida Panhandle, it caught a lot of people by surprise.

Today, meteorologists keep a closer eye on where the pools of heat are. Not every storm has all the right conditions. Too much wind shear can tear apart a storm, but when the atmospheric conditions and ocean temperatures are extremely favorable, you can get this big change.

Hurricanes Katrina and Rita, both in 2005, had pretty much the same signature as Ida. They went over a warm eddy that was just getting ready to be shed form the Loop Current.

Hurricane Michael in 2018 didn’t go over an eddy, but it went over the eddy’s filament – like a tail – as it was separating from the Loop Current. Each of these storms intensified quickly before hitting land.

Of course, these warm eddies are most common right during hurricane season. You’ll occasionally see this happen along the Atlantic Coast, too, but the Gulf of Mexico and the Northwest Caribbean are more contained, so when a storm intensifies there, someone is going to get hit. When it intensifies close to the coast, like Ida did, it can be disastrous for coastal inhabitants.

What does climate change have to do with it?

We know global warming is occurring, and we know that surface temperatures are warming in the Gulf of Mexico and elsewhere. When it comes to rapid intensification, however, my view is that a lot of these thermodynamics are local. How great a role global warming plays remains unclear.

This is an area of fertile research. We have been monitoring the Gulf’s ocean heat content for more than two decades. By comparing the temperature measurements we took during Ida and other hurricanes with satellite and other atmospheric data, scientists can better understand the role the oceans play in the rapid intensification of storms.

Once we have these profiles, scientists can fine-tune the computer model simulations used in forecasts to provide more detailed and accurate warnings in the futures.