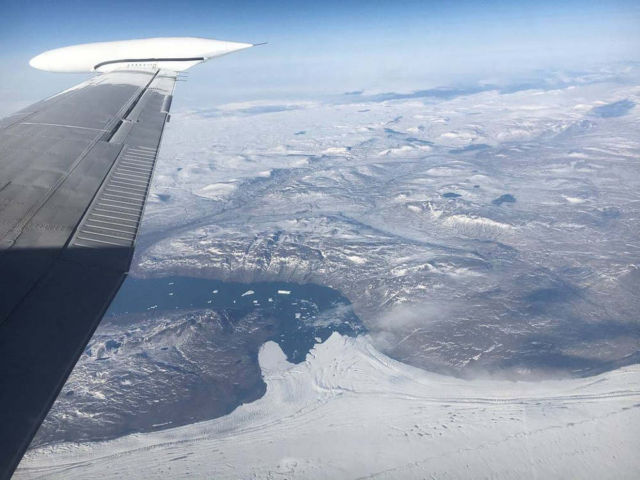 NASA’s Operation IceBridge is flying its summer Arctic land ice campaign in Greenland, to measure the Greenland Ice Sheet and its outlet glaciers.

For the next four weeks, IceBridge will be flying the Land, Vegetation, and Ice Sensor (LVIS) on board Dynamic Aviation’s B-200T King Air aircraft, first out of Thule Air Base, and then Kangerlussuaq, Greenland. This photograph from the mission was taken on Aug. 29, 2017, from 28,000 feet, looking north while surveying Nioghalvfjerdsbrae (79 N) Glacier in northeast Greenland.

Using a fleet of research aircraft, Operation IceBridge images Earth’s polar ice to better understand connections between polar regions and the global climate system. IceBridge studies annual changes in thickness of sea ice, glaciers and ice sheets. IceBridge bridges the gap in polar observations between NASA’s Ice, Cloud and Land Elevation Satellite (ICESat) — which began data collection in 2003 and was de-orbited in 2010  — and ICESat-2, planned for 2018.