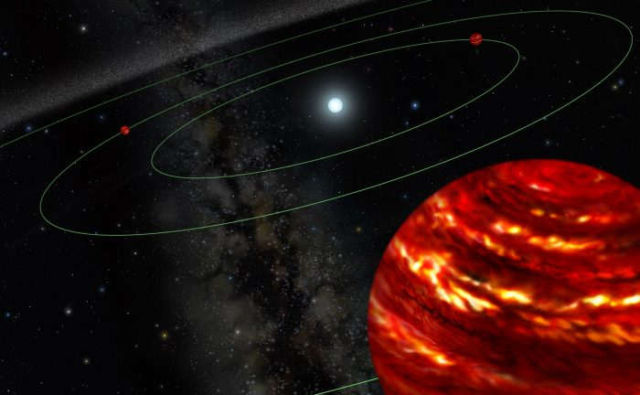 Jason Wang is a graduate student from the Berkeley arm of the NASA-sponsored Nexus for Exoplanet System Science (NExSS). He uses images obtained by the W.M. Keck Observatory over a seven year period, provides a glimpse of these four exoplanets in motion.

Above, artist’s concept of the multi-planet system around HR 8799.   Credit Gemini Observatory/Lynette Cook”

The relatively young star system of HR 8799, is located about 129 light years from Earth in the direction of the Pegasus constellation.

The four planets orbit their star with a 1:2:4:8 resonance, meaning that each planet’s orbital period is in a nearly precise ratio with the others in the system!

Yes, we are in the era of watching planets orbit other stars. HR 8799 harbors four super-Jupiters orbiting with periods that range from decades to centuries. Motion interpolate was used on 7 images of HR 8799 taken from the Keck Telescope over 7 years to create this image.

Read more about it here: manyworlds.space