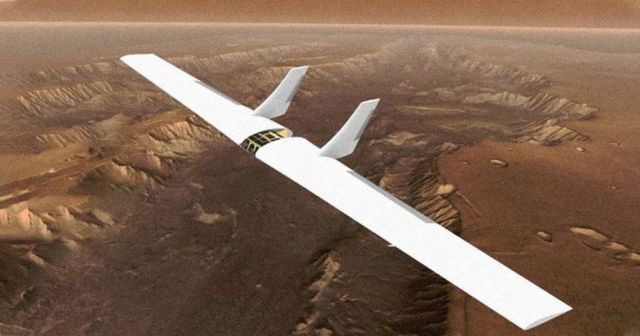 A promising solution to explore the red planet is to develop a sailplane that travels tens to hundreds of kilometers per sol.

The aircraft would be equipped with imagers that provide that in-situ depth of field, with coverage comparable to orbital assets such as MRO.

A major challenge is that the Martian carbon dioxide atmosphere is thin, with a pressure of 1% of Earth at sea level. To compensate, the aircraft needs to fly at high-velocities and have sufficiently large wing area to generate the required lift.

Inflatable wings are an excellent choice as they have the lowest mass and can be used to change shape (morph) depending on aerodynamic or control requirements.

“The present work attempts to describe expected dynamic behavior of the design and contributes to evolving an effective strategy for attitude control required for stable flight and high-quality imaging. The use of Dynamic Soaring as a means of sustained unpowered flight in the low-density Martian atmosphere will be studied through a point mass sailplane model. Using a linear wind gradient model of the Martian atmospheric boundary layer, numerical simulations of such trajectories will at- tempt to demonstrate that longer duration missions can be conducted using such hardware and flight characteristics.”

The 24-kg CubeSat package would utilize some of the 190 kg of ballast tungsten available on the flagship Mars Science Laboratory and upcoming Mars 2020. It would be dropped off during EDL, when the main payload has slowed down to 100 m/s and use its onboard propulsion system to achieve a 1 km separation distance from the rover.

The proposed Mars sailplane defines a new architecture to enable missions in the Mars atmosphere at 1/10 cost, 1/50 mass and volume of previous missions. The Mars sailplane can provide an important support role for high-priority Decadal Science such as Mars sample return 3 . This is going to be made possible through the CubeSat revolution 4 and the recent successful MarCO CubeSats.

source Attitude Control of an Inflatable Sailplane for Mars Exploration