Journey into a Cosmic Reef

Home/Posts/SCIENCES/Astronomy/Journey into a Cosmic Reef
Previous Next

Journey into a Cosmic Reef 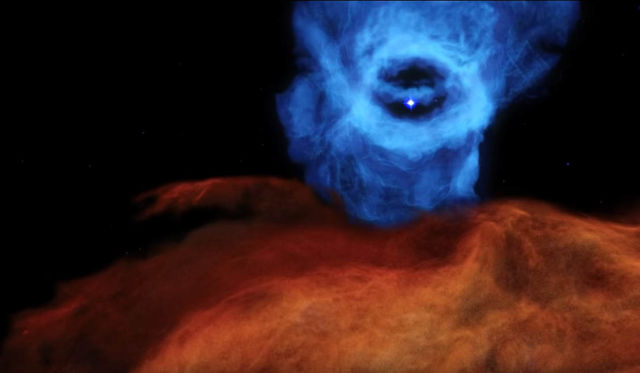 This science visualization presents the dramatic landscape of two nebulas in the Large Magellanic Cloud.

The video, based on images by NASA’s Hubble Space Telescope, takes viewers on a close-up tour of the nebulas’ three-dimensional structures, as envisioned by scientists and artists.

The movie begins with the Hubble view of NGC 2014 (lower left) and NGC 2020 (upper right). The region has been nicknamed the “Cosmic Reef,” because of its resemblance to an undersea world. The camera then flies past myriad stars for a close-up look at NGC 2014. The first stop is the bubble of hot gas on the left that has a coral-like appearance. Energetic ultraviolet light from the system’s most massive stars has heated the gas, while strong stellar winds (streams of charged particles) help create its bubble structure.

The journey continues into the heart of the nebula, home to extraordinarily massive and bright stars.