Last Moments of Star Devoured by a Black Hole

Last Moments of Star Devoured by a Black Hole 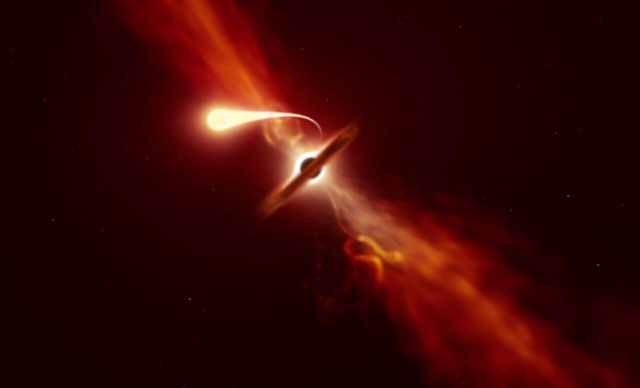 Using telescopes from the European Southern Observatory (ESO) and other organisations around the world, astronomers have spotted a rare blast of light from a star being ripped apart by a supermassive black hole.

The phenomenon, known as a tidal disruption event, is the closest such flare recorded to date at just over 215 million light-years from Earth, and has been studied in unprecedented detail. The research is published today in Monthly Notices of the Royal Astronomical Society.

Matt Nicholl, a lecturer and Royal Astronomical Society research fellow at the University of Birmingham, UK, and the lead author of the new study, said:

“The idea of a black hole ‘sucking in’ a nearby star sounds like science fiction. But this is exactly what happens in a tidal disruption event.”

But these tidal disruption events, where a star experiences what’s known as spaghettification as it’s sucked in by a black hole, are rare and not always easy to study. The team of researchers pointed ESO’s Very Large Telescope (VLT) and ESO’s New Technology Telescope (NTT) at a new flash of light that occurred last year close to a supermassive black hole, to investigate in detail what happens when a star is devoured by such a monster.

Astronomers know what should happen in theory.

Study author Thomas Wevers, an ESO Fellow in Santiago, Chile, who was at the Institute of Astronomy, University of Cambridge, UK, when he conducted the work, explains:

“When an unlucky star wanders too close to a supermassive black hole in the centre of a galaxy, the extreme gravitational pull of the black hole shreds the star into thin streams of material.”

As some of the thin strands of stellar material fall into the black hole during this spaghettification process, a bright flare of energy is released, which astronomers can detect.

Samantha Oates, also at the University of Birmingham, said:

“We found that, when a black hole devours a star, it can launch a powerful blast of material outwards that obstructs our view.”

This happens because the energy released as the black hole eats up stellar material propels the star’s debris outwards.