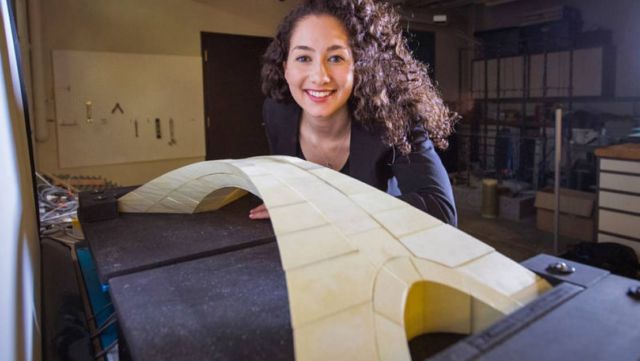 Leonardo da Vinci proposed back in 1502, a radial design for a bridge in Istanbul, that would’ve been the longest in the world.

MIT scientists created a 3D printed replica bridge and found it would have been successful.

From the MIT News:

In 1502 A.D., Sultan Bayezid II sent out the Renaissance equivalent of a government RFP (request for proposals), seeking a design for a bridge to connect Istanbul with its neighbor city Galata. Leonardo da Vinci, already a well-known artist and inventor, came up with a novel bridge design that he described in a letter to the Sultan and sketched in a small drawing in his notebook.

He didn’t get the job. But 500 years after his death, the design for what would have been the world’s longest bridge span of its time intrigued researchers at MIT, who wondered how thought-through Leonardo’s concept was and whether it really would have worked.

To study the question, recent graduate student Karly Bast MEng ’19, working with professor of architecture and of civil and environmental engineering John Ochsendorf and undergraduate Michelle Xie, tackled the problem by analyzing the available documents, the possible materials and construction methods that were available at the time, and the geological conditions at the proposed site, which was a river estuary called the Golden Horn. Ultimately, the team built a detailed scale model to test the structure’s ability to stand and support weight, and even to withstand settlement of its foundations.

The results of the study were presented in Barcelona this week at the conference of the International Association for Shell and Spatial Structures. They will also be featured in a talk at Draper in Cambridge, Massachusetts, later this month and in an episode of the PBS program NOVA, set to air on Nov. 13. 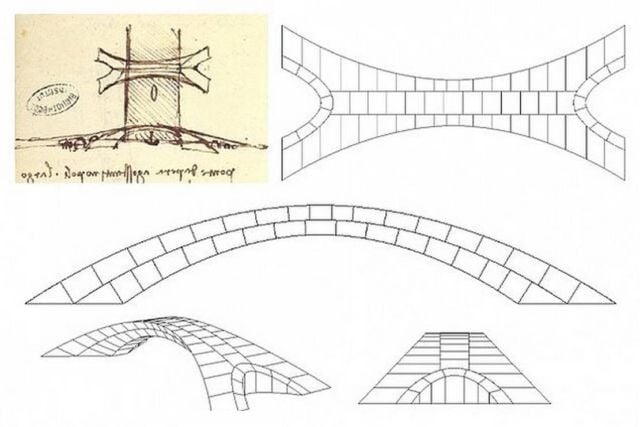 In Leonardo’s time, most masonry bridge supports were made in the form of conventional semicircular arches, which would have required 10 or more piers along the span to support such a long bridge. Leonardo’s bridge concept was dramatically different — a flattened arch that would be tall enough to allow a sailboat to pass underneath with its mast in place, as illustrated in his sketch, but that would cross the wide span with a single enormous arch.

The bridge would have been about 280 meters long (though Leonardo himself was using a different measurement system, since the metric system was still a few centuries off), making it the longest span in the world at that time, had it been built. “It’s incredibly ambitious,” Bast says. “It was about 10 times longer than typical bridges of that time.”

The design also featured an unusual way of stabilizing the span against lateral motions — something that has resulted in the collapse of many bridges over the centuries. To combat that, Leonardo proposed abutments that splayed outward on either side, like a standing subway rider widening her stance to balance in a swaying car.

In his notebooks and letter to the Sultan, Leonardo provided no details about the materials that would be used or the method of construction. Bast and the team analyzed the materials available at the time and concluded that the bridge could only have been made of stone, because wood or brick could not have carried the loads of such a long span. And they concluded that, as in classical masonry bridges such as those built by the Romans, the bridge would stand on its own under the force of gravity, without any fasteners or mortar to hold the stone together.

To prove that, they had to build a model and demonstrate its stability. That required figuring out how to slice up the complex shape into individual blocks that could be assembled into the final structure. While the full-scale bridge would have been made up of thousands of stone blocks, they decided on a design with 126 blocks for their model, which was built at a scale of 1 to 500 (making it about 32 inches long). Then the individual blocks were made on a 3D printer, taking about six hours per block to produce.

“It was time-consuming, but 3D printing allowed us to accurately recreate this very complex geometry,” Bast says.

This is not the first attempt to reproduce Leonardo’s basic bridge design in physical form. Others, including a pedestrian bridge in Norway, have been inspired by his design, but in that case modern materials — steel and concrete — were used, so that construction provided no information about the practicality of Leonardo’s engineering.

“That was not a test to see if his design would work with the technology from his time,” Bast says. But because of the nature of gravity-supported masonry, the faithful scale model, albeit made of a different material, would provide such a test.

“It’s all held together by compression only,” she says. “We wanted to really show that the forces are all being transferred within the structure,” which is key to ensuring that the bridge would stand solidly and not topple.

As with actual masonry arch bridge construction, the “stones” were supported by a scaffolding structure as they were assembled, and only after they were all in place could the scaffolding be removed to allow the structure to support itself. Then it came time to insert the final piece in the structure, the keystone at the very top of the arch.

“When we put it in, we had to squeeze it in. That was the critical moment when we first put the bridge together. I had a lot of doubts” as to whether it would all work, Bast recalls. But “when I put the keystone in, I thought, ‘this is going to work.’ And after that, we took the scaffolding out, and it stood up.”

“It’s the power of geometry” that makes it work, she says. “This is a strong concept. It was well thought out.” Score another victory for Leonardo.

“Was this sketch just freehanded, something he did in 50 seconds, or is it something he really sat down and thought deeply about? It’s difficult to know” from the available historical material, she says. But proving the effectiveness of the design suggests that Leonardo really did work it out carefully and thoughtfully, she says. “He knew how the physical world works.”

He also apparently understood that the region was prone to earthquakes, and incorporated features such as the spread footings that would provide extra stability. To test the structure’s resilience, Bast and Xie built the bridge on two movable platforms and then moved one away from the other to simulate the foundation movements that might result from weak soil. The bridge showed resilience to the horizontal movement, only deforming slightly until being stretched to the point of complete collapse.

The design may not have practical implications for modern bridge designers, Bast says, since today’s materials and methods provide many more options for lighter, stronger designs. But the proof of the feasibility of this design sheds more light on what ambitious construction projects might have been possible using only the materials and methods of the early Renaissance. And it once again underscores the brilliance of one of the world’s most prolific inventors.

It also demonstrates, Bast says, that “you don’t necessarily need fancy technology to come up with the best ideas.”