Scientists developed manta ray robot, that swims fast and operates up to 10 hours.

Researchers from the NUS Department of Mechanical Engineering have created an aquatic robot that emulates the swimming locomotion of manta rays.

The robot is capable of swimming at a speed of twice its body length per second for up to 10 hours, and could potentially be employed for underwater surveillance.

Manta rays are considered one of nature’s most graceful and efficient swimmers. Unlike most underwater species, manta rays possess a unique propulsion mechanism that enables them to cruise through turbulent seas by flapping their pectoral fins effortlessly. This distinctive feature has sparked great interests in understanding the science behind the mechanism and to incorporate similar mechanisms into autonomous underwater vehicles (AUVs). 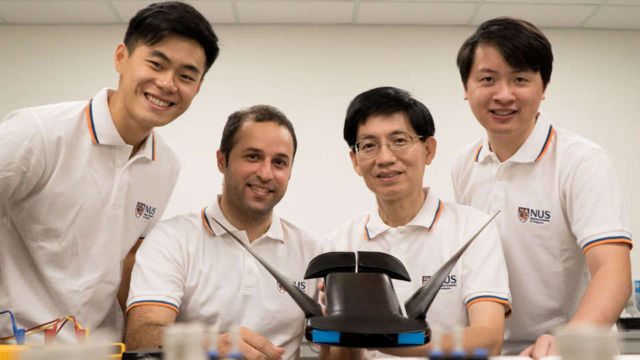 Motivated to develop a bio-inspired AUV, a research team led by Associate Professor Chew Chee Meng and Associate Professor Yeo Khoon Seng from the Department of Mechanical Engineering at NUS Faculty of Engineering developed MantaDroid, which resembles a juvenile manta ray. Measuring 35cm in length, 63cm in width and weighing only 0.7kg, MantaDroid can swim at a speed of 0.7m per second, which is twice its body length, for up to 10 hours.