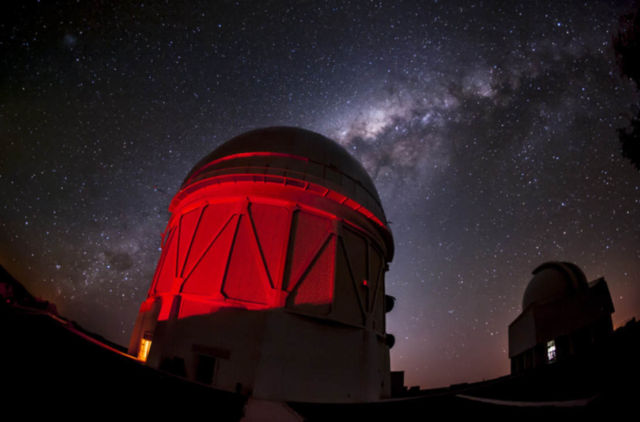 Scientists discovered more than 100 minor planets beyond Neptune, at the far reaches of the Solar System.

Using data from the Dark Energy Survey (DES), researchers have found more than 300 trans-Neptunian objects (TNOs), minor planets located in the far reaches of the solar system, including more than 100 new discoveries.

Above: The Blanco Telescope dome at the Cerro Tololo Inter-American Observatory in Chile, where the Dark Energy Camera used for the recently completed Dark Energy Survey was housed.  Credit Reidar Hahn, Fermilab

Published in The Astrophysical Journal Supplement Series, the study also describes a new approach for finding similar types of objects and could aid future searches for the hypothetical Planet Nine and other undiscovered planets. The work was led by graduate student Pedro Bernardinelli and professors Gary Bernstein and Masao Sako.

This updated catalog of trans-Neptunian objects and the methods used to find them could aid in future searches for undiscovered planets in the far reaches of the solar system.

The goal of DES, which completed six years of data collection in January, is to understand the nature of dark energy by collecting high-precision images of the southern sky. While DES wasn’t specifically designed with TNOs in mind, its breadth and depth of coverage made it particularly adept at finding new objects beyond Neptune. “The number of TNOs you can find depends on how much of the sky you look at and what’s the faintest thing you can find,” says Bernstein.

Because DES was designed to study galaxies and supernovas, the researchers had to develop a new way to track movement. Dedicated TNO surveys take measurements as frequently as every hour or two, which allows researchers to more easily track their movements. “Dedicated TNO surveys have a way of seeing the object move, and it’s easy to track them down,” says Bernardinelli. “One of the key things we did in this paper was figure out a way to recover those movements.”

Using the first four years of DES data, Bernardinelli started with a dataset of 7 billion “dots,” all of the possible objects detected by the software that were above the image’s background levels. He then removed any objects that were present on multiple nights—things like stars, galaxies, and supernova—to build a “transient” list of 22 million objects before commencing a massive game of “connect the dots,” looking for nearby pairs or triplets of detected objects to help determine where the object would appear on subsequent nights.