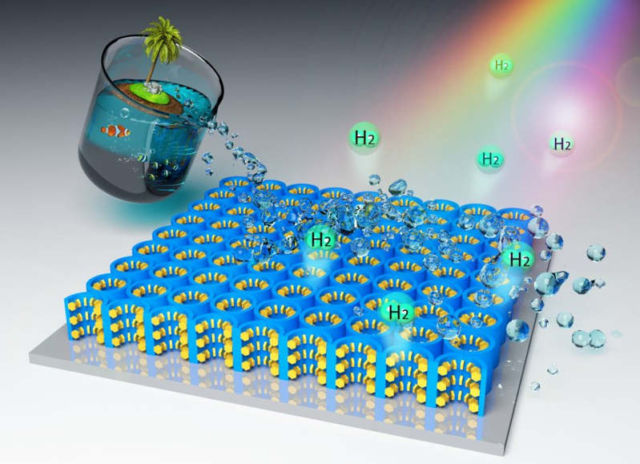 A new nanomaterial can extract Hydrogen fuel from seawater using only sunshine.

A new technique created at the University of Central Florida efficiently creates hydrogen fuel from seawater.

Today we produce hydrogen to power fuel cells by extracting the gas from seawater, but the electricity required makes the process costly.

UCF researcher Yang Yang has come up with a new hybrid nanomaterial that harnesses solar energy and uses it to generate hydrogen from seawater more cheaply and efficiently than current materials.

The breakthrough could someday lead to a new source of the clean-burning fuel, ease demand for fossil fuels and boost the economy of Florida, where sunshine and seawater are abundant.

Yang Yang, who has been working on this type of technology for a decade, said:

“We’ve opened a new window to splitting real water, not just purified water in a lab. This really works well in seawater.

We can absorb much more solar energy from the light than the conventional material. Eventually, if it is commercialized, it would be good for Florida’s economy. We have a lot of seawater around Florida and a lot of really good sunshine.”