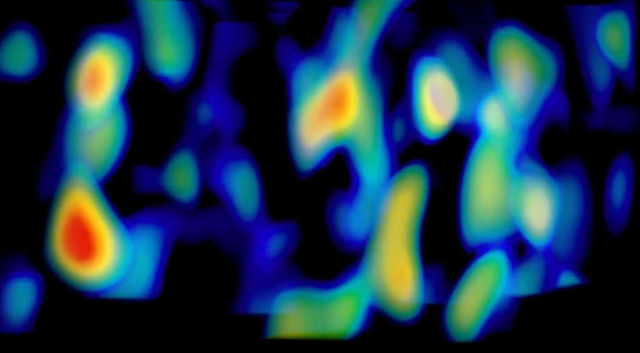 Scientists measure where and how dark matter structures grow from the early days of the Universe.

Dark matter is a hypothetical form of matter that is thought to account for approximately 85% of the matter in the universe, and about a quarter of its total energy density. The majority of dark matter is thought to be non-baryonic in nature, possibly being composed of some as-yet undiscovered subatomic particles.

Researchers don’t know what dark matter is. But what they do know is that the gravitational effects they observe in the Universe, cannot be accounted by observable matter alone.

Above, an image from “HSC Mass Map” video by Kavli IMPU, showing a 3D map of how mass and dark matter are distributed throughout the universe. The areas with more mass are indicated by brighter red and yellow colors, and less by blue and black.

Physicist Chiaki Hikage of the Kavli Institute for the Physics and Mathematics of the Universe and colleagues, analyzed images of 10 million galaxies with the 870 megapixel Subaru telescope in Hawaii.

They created a map of dark matter from the early days of the universe.

According to the press release, the gigantic structure of dark matter in the universe formed more slowly that previously believed. That “appear to challenge current understanding of the fundamental laws of physics.”

“If further data shows we’re definitely right, then it suggests something is missing from our current understanding of the Standard Model and the general theory of relativity.

With a little more work, if we can get better accuracy, we might be able to find something concrete. This is a big motivating factor for me.”