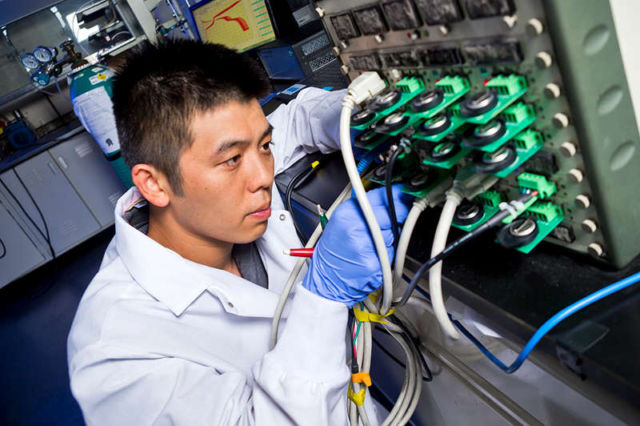 A team led by researchers at University of Maryland UMD’s A. James Clark School of Engineering, has created a water-based zinc battery that is simultaneously powerful, rechargeable, and intrinsically safe.

A paper based on the research was published April 16 in the high-impact journal Nature Materials.

Using a novel aqueous electrolyte instead of the flammable organic electrolyte used in conventional lithium-ion batteries, the researchers cranked up the energy of the aqueous battery by adding metallic zinc – used as the anode of the very first battery – and its salt to the electrolyte as well.

Fei Wang, a jointly appointed postdoctoral associate at UMD’s Clark School and ARL, and first author of the paper, said:

“Water-based batteries could be crucial to preventing fires in electronics, but their energy storage and capacity have been limited – until now. For the first time, we have a battery that could compete with the lithium-ion batteries in energy density, but without the risk of explosion or fire.”

The researchers say the new aqueous zinc battery could eventually be used not just in consumer electronics, but also in extreme conditions to improve the performance of safety-critical vehicles such as those used in aerospace, military, and deep-ocean environments.