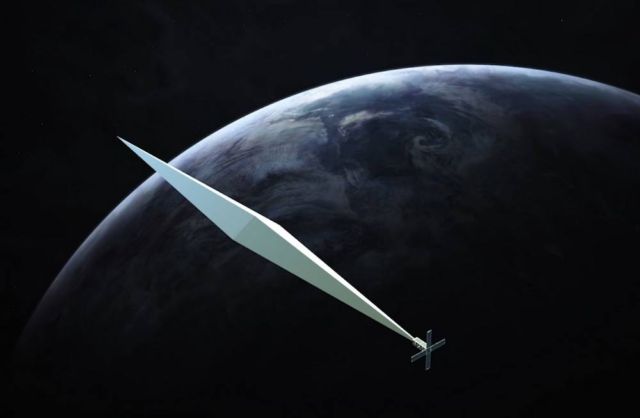 Artist Trevor Paglen in collaboration with the Nevada Museum of Art, will launch “Orbital Reflector,” the first satellite to exist purely as an artistic gesture.

Orbital Reflector diamond-shape balloon satellite, will travel to low Earth orbit aboard a SpaceX Falcon 9 rocket, and remain there for approximately two months. It will appear as bright as a star in the Big Dipper.

Orbital Reflector is a sculpture constructed of a lightweight material similar to Mylar.

It is housed in a small box-like infrastructure known as a CubeSat and launched into space aboard a rocket. Once in low Earth orbit at a distance of about 350 miles (575 kilometers) from Earth, the CubeSat opens and releases the sculpture, which self-inflates like a balloon.

Sunlight reflects onto the sculpture making it visible from Earth with the naked eye — like a slowly moving artificial star as bright as a star in the Big Dipper. Global Western is an aerospace firm working with Trevor Paglen and the Nevada Museum of Art to design and manufacture Orbital Reflector.

Spaceflight Industries will arrange for the launch of Orbital Reflector on board a SpaceX Falcon 9 rocket.