Home/Posts/SCIENCES/Physics/Reading Minds with Ultrasound
Previous Next 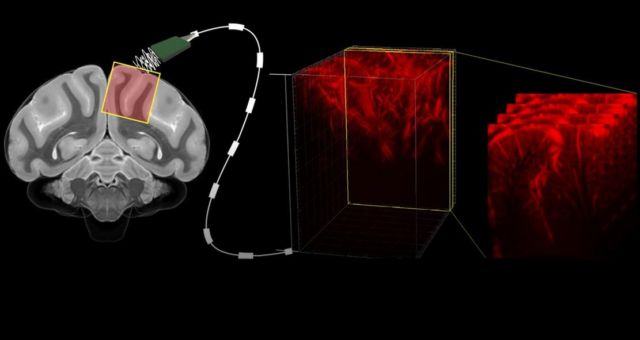 What is happening in your brain as you are scrolling through this page? In other words, which areas of your brain are active, which neurons are talking to which others, and what signals are they sending to your muscles?

Mapping neural activity to corresponding behaviors is a major goal for neuroscientists developing brain–machine interfaces (BMIs): devices that read and interpret brain activity and transmit instructions to a computer or machine. Though this may seem like science fiction, existing BMIs can, for example, connect a paralyzed person with a robotic arm; the device interprets the person’s neural activity and intentions and moves the robotic arm correspondingly. 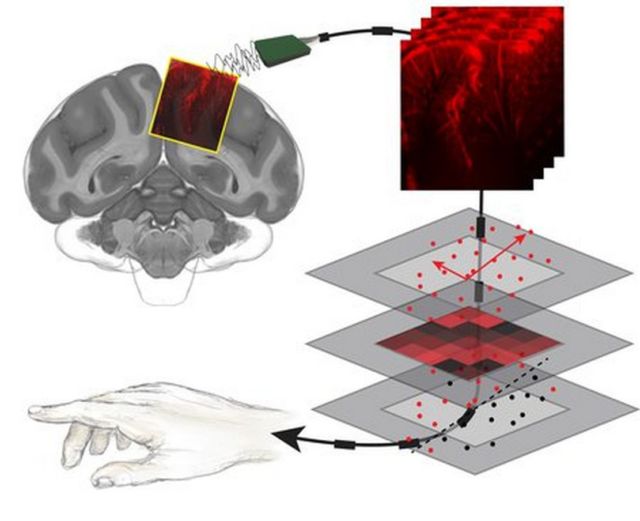 A diagram illustrating how a new type of ultrasound is used to image a motor-planning region of the brain in non-human primates. The neural activity shown in those brain images was then decoded to correspond with movements. This process was shown to accurately predict movements even before they happened. Credit: S. Norman

A major limitation for the development of BMIs is that the devices require invasive brain surgery to read out neural activity. But now, a collaboration at Caltech has developed a new type of minimally invasive BMI to read out brain activity corresponding to the planning of movement. Using functional ultrasound (fUS) technology, it can accurately map brain activity from precise regions deep within the brain at a resolution of 100 micrometers (the size of a single neuron is approximately 10 micrometers).

“Invasive forms of brain–machine interfaces can already give movement back to those who have lost it due to neurological injury or disease,” says Sumner Norman, postdoctoral fellow in the Andersen lab and co-first author on the new study. “Unfortunately, only a select few with the most severe paralysis are eligible and willing to have electrodes implanted into their brain. Functional ultrasound is an incredibly exciting new method to record detailed brain activity without damaging brain tissue. We pushed the limits of ultrasound neuroimaging and were thrilled that it could predict movement. What’s most exciting is that fUS is a young technique with huge potential—this is just our first step in bringing high performance, less invasive BMI to more people.”

The new study is a collaboration between the laboratories of Richard Andersen, James G. Boswell Professor of Neuroscience and Leadership Chair and director of the Tianqiao and Chrissy Chen Brain–Machine Interface Center in the Tianqiao and Chrissy Chen Institute for Neuroscience at Caltech; and of Mikhail Shapiro, professor of chemical engineering and Heritage Medical Research Institute Investigator. Shapiro is an affiliated faculty member with the Chen Institute.