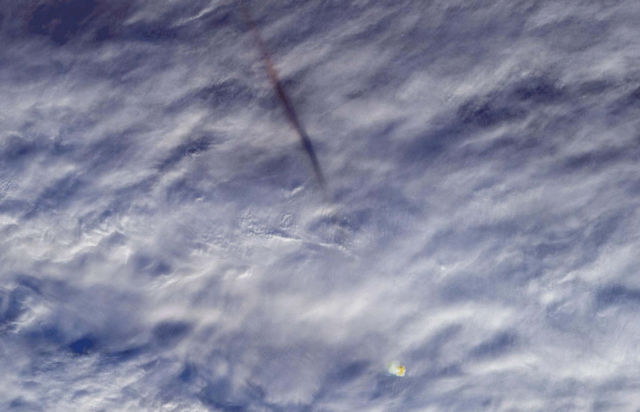 On Dec. 18, 2018, a large “fireball“ – the term used for exceptionally bright meteors that are visible over a wide area – exploded about 16 miles (26 kilometers) above the Bering Sea.

The explosion unleashed an estimated 173 kilotons of energy, or more than 10 times the energy of the atomic bomb blast over Hiroshima during World War II.

This image sequence shows views from five of nine cameras on the Multi-angle Imaging SpectroRadiometer (MISR) instrument taken at 23:55 Coordinated Universal Time (UTC), a few minutes after a fireball – the term used for exceptionally bright meteors that are visible over a wide area – exploded over the Bering Sea on Dec. 18, 2018.

The shadow of the meteor’s trail through Earth’s atmosphere, cast on the cloud tops and elongated by the low sun angle, is to the northwest. The orange-tinted cloud that the fireball left behind by super-heating the air it passed through can be seen below and to the right of the GIF’s center.

The MISR instrument was built and is managed by NASA’s Jet Propulsion Laboratory in Pasadena, California, for NASA’s Science Mission Directorate in Washington. JPL is a division of Caltech. The Terra spacecraft is managed by NASA’s Goddard Space Flight Center in Greenbelt, Maryland. The MISR data were obtained from the NASA Langley Research Center Atmospheric Science Data Center in Hampton, Virginia.