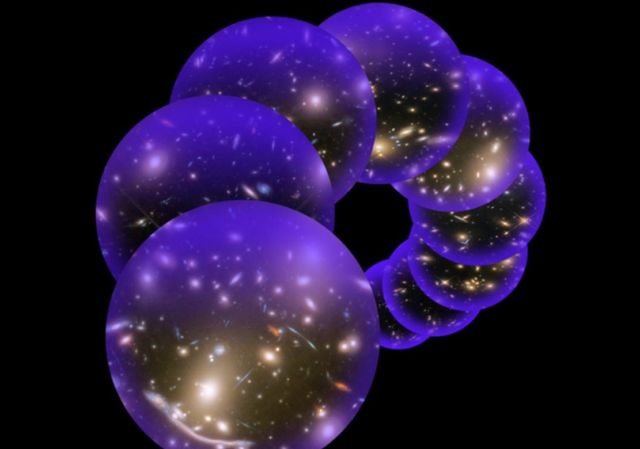 Scientists by creating millions of virtual universes and comparing them to observations of actual galaxies, made discoveries that present a powerful new approach for studying galaxy formation.

How do galaxies such as our Milky Way come into existence? How do they grow and change over time? The science behind galaxy formation has remained a puzzle for decades, but a University of Arizona-led team of scientists is one step closer to finding answers thanks to supercomputer simulations.

Observing real galaxies in space can only provide snapshots in time, so researchers who want to study how galaxies evolve over billions of years have to revert to computer simulations. Traditionally, astronomers have used this approach to invent and test new theories of galaxy formation, one-by-one.

Above, a UA-led team of scientists generated millions of different universes on a supercomputer, each of which obeyed different physical theories for how galaxies should form.  Credit NASA, ESA, and J. Lotz and the HFF Team/STScI

Peter Behroozi, an assistant professor at the UA Steward Observatory, and his team overcame this hurdle by generating millions of different universes on a supercomputer, each of which obeyed different physical theories for how galaxies should form.

The findings, published in the Monthly Notices of the Royal Astronomical Society, challenge fundamental ideas about the role dark matter plays in galaxy formation, how galaxies evolve over time and how they give birth to stars. 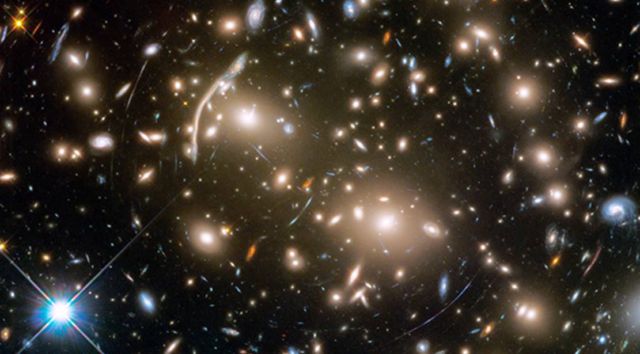 The Hubble Space Telescope took this image of Abell 370, a galaxy cluster 4 billion light-years from Earth. Several hundred galaxies are tied together by gravity. The arcs of blue light are distorted images of galaxies far behind the cluster, too faint for Hubble to see directly.  CreditNASA, ESA, and J. Lotz and the HFF Team/STScI

“On the computer, we can create many different universes and compare them to the actual one, and that lets us infer which rules lead to the one we see,” said Behroozi, the study’s lead author.

The study is the first to create self-consistent universes that are such exact replicas of the real one: computer simulations that each represent a sizeable chunk of the actual cosmos, containing 12 million galaxies and spanning the time from 400 million years after the Big Bang to the present day.

Each “Ex-Machina” universe was put through a series of tests to evaluate how similar galaxies appeared in the generated universe compared to the true universe. The universes most similar to our own all had similar underlying physical rules, demonstrating a powerful new approach for studying galaxy formation.

The results from the “UniverseMachine,” as the authors call their approach, have helped resolve the long-standing paradox of why galaxies cease to form new stars even when they retain plenty of hydrogen gas, the raw material from which stars are forged.

Commonly held ideas about how galaxies form stars involve a complex interplay between cold gas collapsing under the effect of gravity into dense pockets giving rise to stars, while other processes counteract star formation.

For example, it is thought that most galaxies harbor supermassive black holes in their centers. Matter falling into these black holes radiates tremendous energies, acting as cosmic blowtorches that prevent gas from cooling down enough to collapse into stellar nurseries. Similarly, stars ending their lives in supernova explosions contribute to this process. Dark matter, too, plays a big role, as it provides for most of the gravitational force acting on the visible matter in a galaxy, pulling in cold gas from the galaxy’s surroundings and heating it up in the process.

“As we go back earlier and earlier in the universe, we would expect the dark matter to be denser, and therefore the gas to be getting hotter and hotter. This is bad for star formation, so we had thought that many galaxies in the early universe should have stopped forming stars a long time ago,” Behroozi said. “But we found the opposite: galaxies of a given size were more likely to form stars at a higher rate, contrary to the expectation.”