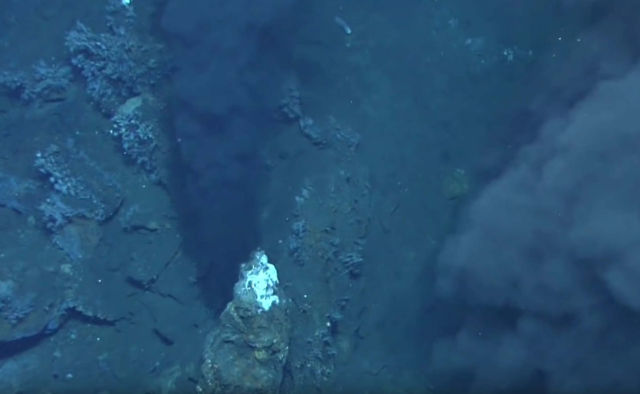 NASA scientists have reproduced in the lab how the ingredients for life could have formed deep in the ocean 4 billion years ago.

They have reproduced in the lab how the ingredients for life could have formed deep in the ocean 4 billion years ago. The results of the new study offer clues to how life started on Earth and where else in the cosmos we might find it.

Scientists discover black smoker chimneys on the second ROV dive at the Mata Ua volcano at a depth of 2,100 meters. Video courtesy of MARUM, University of Bremen and NOAA-Pacific Marine Environmental Laboratory.

Astrobiologist Laurie Barge and her team at NASA’s Jet Propulsion Laboratory in Pasadena, California, are working to recognize life on other planets by studying the origins of life here on Earth. Their research focuses on how the building blocks of life form in hydrothermal vents on the ocean floor.

To re-create hydrothermal vents in the lab, the team made their own miniature seafloors by filling beakers with mixtures that mimic Earth’s primordial ocean. These lab-based oceans act as nurseries for amino acids, organic compounds that are essential for life as we know it. Like Lego blocks, amino acids build on one another to form proteins, which make up all living things.

Laurie Barge, the lead investigator and the first author on the new study, published in the journal Proceedings of the National Academy of Sciences, said:

“Understanding how far you can go with just organics and minerals before you have an actual cell is really important for understanding what types of environments life could emerge from. Also, investigating how things ike the atmosphere, the ocean and the minerals in the vents all impact this can help you understand how likely this is to have occurred on another planet.”