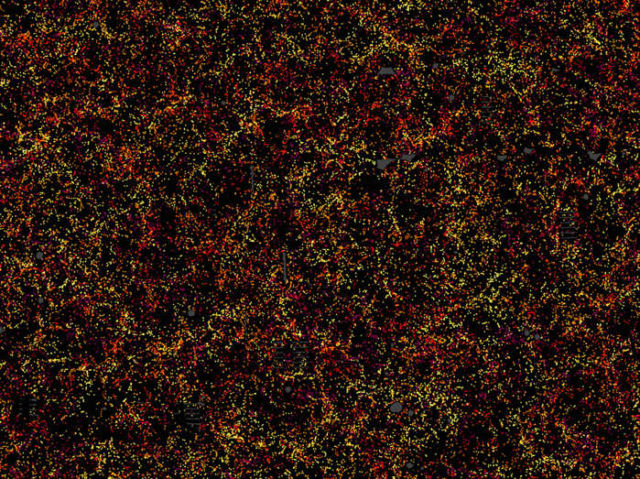 Astronomers created the largest-ever 3D map of the Universe, containing a record-breaking 1.2 million galaxies, to study the properties of dark energy.

This is one slice through the map of the large-scale structure of the Universe from the Sloan Digital Sky Survey and its Baryon Oscillation Spectroscopic Survey. Each dot in this picture indicates the position of a galaxy 6 billion years into the past.  Credit: Daniel Eisenstein and the SDSS-III collaboration

Galaxies are highly clustered, revealing superclusters and voids whose presence is seeded in the first fraction of a second after the Big Bang. This image contains 48,741 galaxies, about 3% of the full survey dataset. Grey patches are small regions without survey data.

Jeremy Tinker of New York University, a co-leader of the scientific team that led this effort, said:

“This map has allowed us to make the best measurements yet of the effects of dark energy in the expansion of the Universe.”

These new measurements were carried out by the Baryon Oscillation Spectroscopic Survey (BOSS) program of SDSS-III. Shaped by a continuous tug-of-war between dark matter and dark energy, the map revealed by BOSS allows astronomers to measure the expansion rate of the Universe and thus determine the amount of matter and dark energy that make up the present-day Universe.

A section of the three-dimensional map constructed by BOSS.  Credit Jeremy Tinker and the SDSS-III collaboration