Sunglint on the Aegean and Mediterranean

Sunglint on the Aegean and Mediterranean 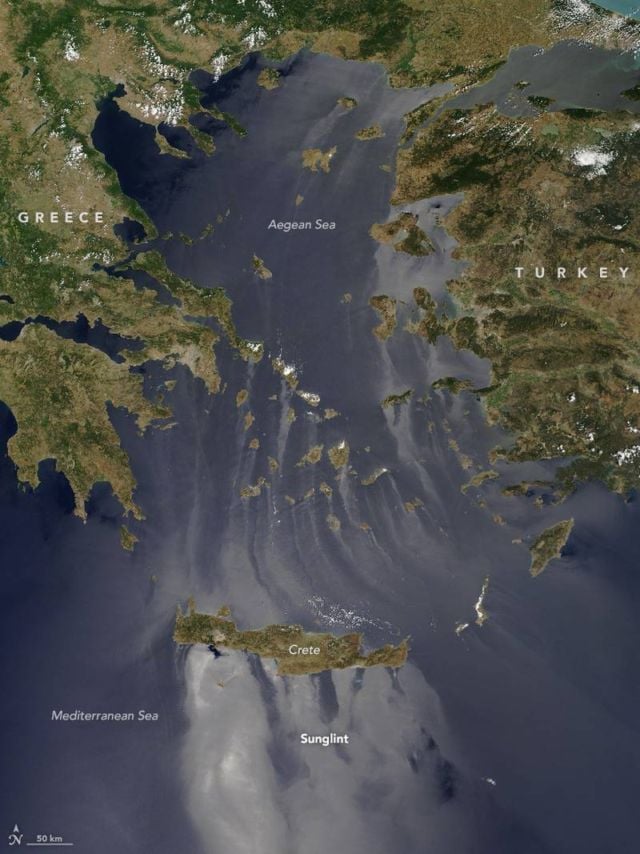 In this satellite image you can see the sunglint phenomenon on the Aegean and Mediterranean, in Greece.

The Moderate Resolution Imaging Spectroradiometer (MODIS) on NASA’s Terra satellite captured this image of sunglint on the waters around Aegean Islands and Crete, on July 6, 2017.

The phenomenon of sunglint is a matter of optics. Areas where the sea surface is smoother reflect more sunlight directly back to the satellite’s imager. In contrast, areas of rougher water appear darker because light is scattered in many more directions.

Dry, cool winds from the north, called the Etesian winds, are common over the Aegean Sea during summer. On the windward side of the islands, those winds pile up the water and disturb the surface. But as those air masses run into the islands and their rocky peaks, a “wind shadow” with much calmer winds (and seas) form on the leeward side of islands (in this case, the south sides). Darker areas amid the bright streaks could be the result of wind or water turbulence, or perhaps breaks in the wind-blocking land topography.