Team of Drones 3D-Print a Tower

Home/Posts/TECHNOLOGY/Aviation, Technology news/Team of Drones 3D-Print a Tower
Previous Next

Team of Drones 3D-Print a Tower 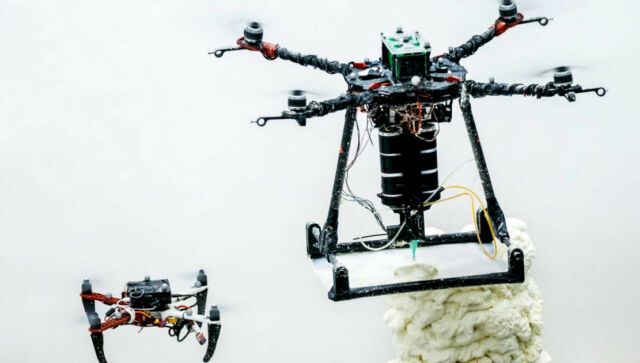 Researchers have mounted 3D printers onto drones to create swarms of robots that could 3D print entire buildings.

The drones were specially designed to be able to deposit a cement like material with enough precision to build tall structures. Groups of them together could do the job even faster.

The new technique, inspired by nature, involves multiple drones working together to build from a single blueprint.

Mirko Kovac, director of the Aerial Robotics Laboratory at Imperial College London, who led the research, says the method could be used to construct buildings in the Arctic or even on Mars, or simply to help repair tall buildings that normally would require expensive scaffolding.