The Beauty of Ice

The Beauty of Ice 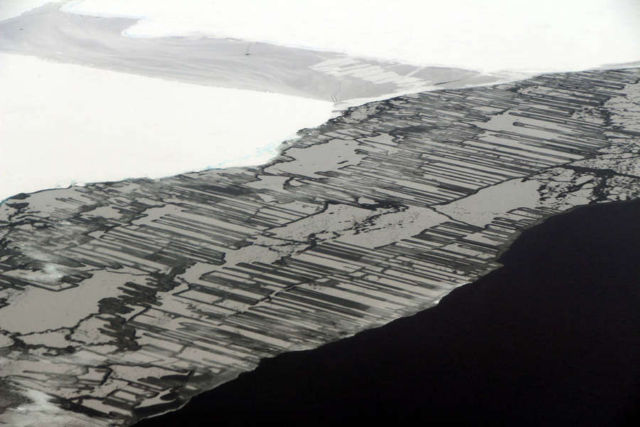 Ice can be stunningly beautiful and also quite varied in its appearance, like this icy fingers in the Weddell Sea, in Antarctica.

The most obvious differences are between the two main ice types: land ice and sea ice. But even sea ice can vary dramatically from one place to another. On November 14, Operation IceBridge scientist John Sonntag took this photograph of ice in the Weddell Sea, a part of the Southern Ocean off the Antarctic Peninsula.

The geometric shapes are due to a phenomenon known as “finger rafting,” which occurs when two floes of thin ice collide. As a result of the collision, blocks of ice slide above and below each other in a pattern that resembles a zipper or interlocking fingers. Brine expelled from the ice forms a solution that acts as a lubricant. For finger rafting to occur, it’s critical that the ice be thin—calculations suggest no more than 8 inches, or 20 centimeters. Any thicker and the ice loses its flexibility. Without flexibility, thicker ice floes that collide can result in a big pile up known as “ridging.”

The mission of Operation IceBridge is to collect data on changing polar ice and maintain continuity of measurements between ICESat missions. The original ICESat mission launched in 2003 and ended in 2009, and its successor, ICESat-2, is scheduled for launch in late 2018. Operation IceBridge began in 2009 and is currently planned to continue until 2020 so it to overlaps with ICESat-2 to help scientists connect measurements from the two satellites.