The Biggest Galaxy ever found

The Biggest Galaxy ever found 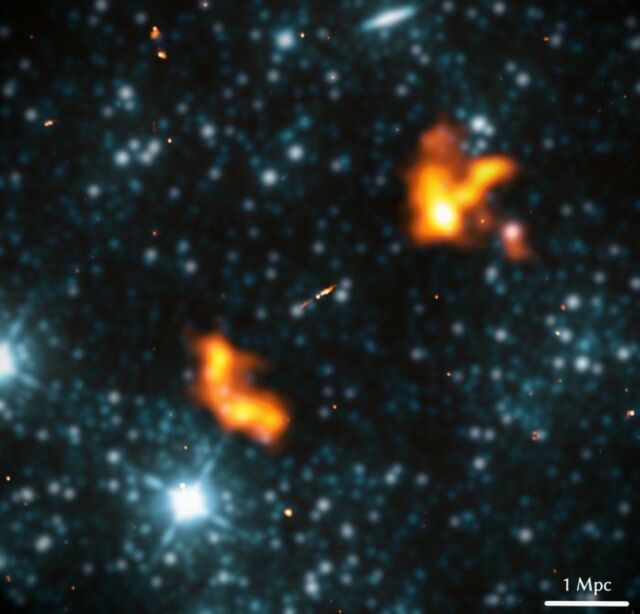 A team led by Dutch PhD student Martijn Oei has discovered a giant radio galaxy. The pair of plasma plumes is the largest structure made by a galaxy known thus far. The finding disproves some long-kept hypotheses about the growth of radio galaxies.

A supermassive black hole lurks in the centre of many galaxies, which slows down the birth of new stars and therefore strongly influences the lifecycle of the galaxy as a whole. Sometimes, this leads to tumultuous scenes: the black hole can create two jet streams, that catapult the building material for baby stars out of the galaxy at almost the speed of light. In this violent process, the stardust heats up so much that it dissolves into plasma and glows in radio light. The international team of researchers from Leiden (The Netherlands), Hertfortshire, Oxford (both UK), and Paris (France) have now collected that light – with the pan-European LOFAR telescope, whose epicentre lies in a marshy Dutch ‘radio dark’ nature reserve, where your smartphone deliberately loses signal.
Record length

The picture of the two plasma plumes is special, because never before scientists saw a structure this big made by a single galaxy. The discovery shows that the sphere of influence of some galaxies reaches far from their direct environment. How far, exactly? That is hard to determine.

Astronomical pictures are taken from a single viewpoint (Earth), and therefore do not contain depth. As a result, scientists can only measure a part of the radio galaxy length: a low estimate of the total length. But even that lower bound, of more than 16 million light years, is gargantuan, and comparable to one hundred Milky Ways in a row.

The research has been accepted by Astronomy & Astrophysics, available on arXiv.