The Carbon Monoxide that is coming off the Burning Amazon

The Carbon Monoxide that is coming off the Burning Amazon 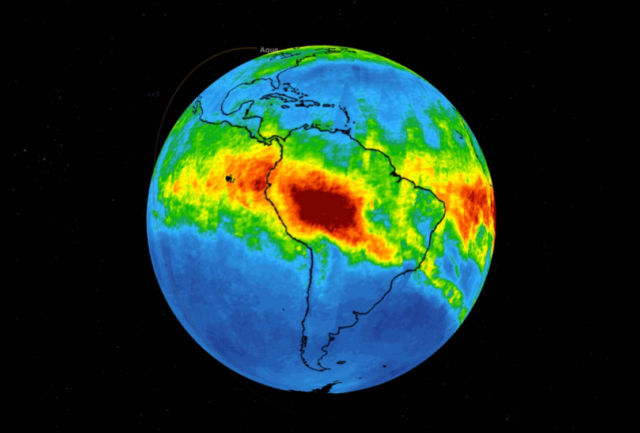 Carbon monoxide has hit 160 ppbv high over some regions, according to NASA Atmospheric Infrared Sounder (AIRS) instrument on Aqua satellite.

This time series shows carbon monoxide associated with fires from the Amazon region in Brazil from Aug. 8-22, 2019. The images map carbon monoxide at approximately 18,000 feet (5,500 meters) altitude. Each “day” in the series is made by averaging three day’s-worth of measurements. Credit: NASA/JPL-Caltech

A pollutant that can travel large distances, carbon monoxide can persist in the atmosphere for about a month. At the high altitude mapped in these images, the gas has little effect on the air we breathe; however, strong winds can carry it downward to where it can significantly impact air quality. Carbon monoxide plays a role in both air pollution and climate change.

AIRS, in conjunction with the Advanced Microwave Sounding Unit (AMSU), senses emitted infrared and microwave radiation from Earth to provide a three-dimensional look at Earth’s weather and climate. With more than 2,000 channels sensing different regions of the atmosphere, the instruments create a global, three-dimensional map of atmospheric temperature and humidity, cloud amounts and heights, greenhouse gas concentrations and many other atmospheric phenomena.

The AIRS and AMSU instruments are managed by NASA’s Jet Propulsion Laboratory in Pasadena, California, under contract to NASA. JPL is a division of Caltech.